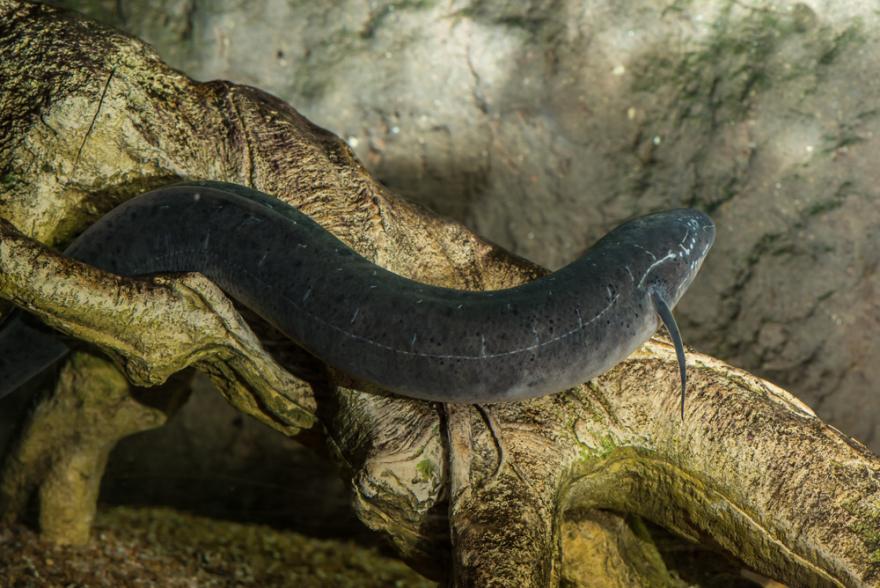 African lungfish live in freshwater swamps, backwaters and small rivers in West and South Africa. These prehistoric animals have survived unchanged for nearly 400 million years and are sometimes referred to as "living fossils."

Life of an African lungfish

African lungfish have some fascinating adaptations. They have two lungs, and can breathe air. This is a vital feature, since they live in flood plains in waterways that often dry up. To manage this life-threatening situation, the lungfish secretes a thin layer of mucus around itself that dries into a cocoon. It can live out of water in this cocoon for up to a year, breathing through its lungs until rains refill its waterway. 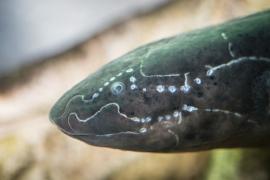 The African lungfish also hibernates in water. It digs 1-9 inches into the soil and debris at the bottom of its waterway, then wiggles in the mud to create a bulb-shaped chamber and rests there with its nose pointing upward. Its metabolic rate slows down, and the nutrients it needs to survive come from breakdown of its muscle tissue. It can remain up to 4 years in this state.

African Lungfish can use their thin hind limbs to lift themselves off the bottom surface and propel themselves forward. This is probably possible because they can fill their lungs with air, adding to the buoyancy of their bodies in water. Scientists believe that lungfish may be closely related to the animals that were able to evolve and come of the water and onto land.

African lungfish are omnivorous, eating a varied diet that includes frogs, fish and mollusks as well as tree roots and seeds. They grow between 6 ½ and 40 inches long, and can weigh up to nearly 8 pounds.

The female African lungfish lays its eggs in a nest in a weedy area of its habitat. Once the eggs hatch, the males guard the young for up to two months. The larvae have external gills that are reabsorbed during their metamorphosis into fully developed lungfish. As the African lungfish develops from juvenile to adult, its teeth fuse together to form tooth plates, which are used to chew its food.

The African lungfish has a large range, and there are no widespread threats to the species. It is listed as of Least Concern with the International Union for Conservation of Nature (IUCN).

How you can help African lungfish

African lungfish at the Oregon Zoo

The zoo's lungfish is a female named "Siti," which means "lady" in Swahili. She lives in the Africa Rainforest exhibit and eats a daily diet of smelt, small mice and earthworms, along with the occasional live crayfish for enrichment.