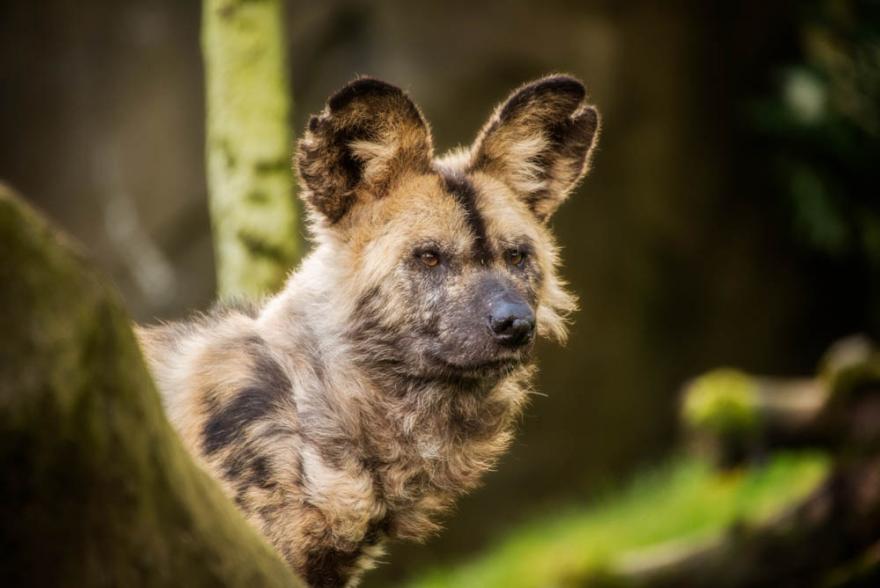 African wild dog Lycaon pictus African painted dogs—also known as African wild dogs—live in the savanna, grasslands and open range of sub-Saharan Africa. They are members of the "true dog" family, Canidae. They are related to jackals, foxes, coyotes, wolves and domestic dogs.

The life of an African painted dog

The scientific name for the African painted dog is Lycaon pictus, which means "painted wolf." The coat markings on each individual are unique. Their highly sensitive ears act like satellite dishes, allowing them to hear their prey from a distance. Their large ears serve as cooling systems, too: air moves over the blood vessels in their ears and carries heat away. 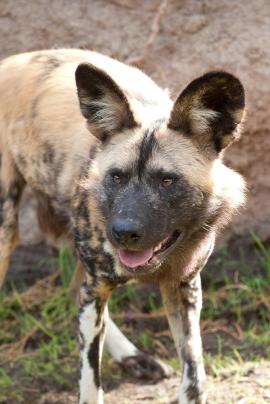 African painted dogs don't stick to one territory; instead, they range between 80 and 800 square miles, hunting mostly at dawn and dusk to avoid lions and other predators. Their large lungs and long legs allow them to chase their prey at up to 30 miles an hour for up to 3 ½ miles until the hunted animal slows down from fatigue.

African painted dogs live and hunt in large groups called "packs." They work as a team, communicating with each other using high-pitched squeaking noises that sound like tennis shoes rubbing on a gym floor. Hunting cooperatively, they can take down not only a medium-sized antelope but also larger animals like the kudu and the wildebeest. Their hunts are successful 70-90% of the time.

The pack is led by a dominant breeding pair that takes on the most dangerous roles during hunts. Only the dominant pair breeds and has young, but the entire pack helps feed and protect their large litters of pups. All the adults regurgitate food for younger pups and for any pack members who are sick.

The dominant female is pregnant for 70 days and gives birth to an average of 10 pups. Born blind and weighing less than a pound, the pups stay in the den with their mother for a 2-3 weeks, then returns to the hunt as the entire pack helps to care for the pups. The pups begin eating regurgitated food at 4-5 weeks, and start roaming with the pack at 3 months. The pack continues to care and protect the pups until they are mature at 12 to 14 months.

African painted dogs live about 10 years, both in the wild and in captivity.

African painted dogs are listed as Endangered by the IUCN, the International Union for Conservation of Nature. Their numbers continue to decline because of viral diseases like rabies and distemper, along with competition with large predators like lions, conflicts with humans, and habitat fragmentation. In the middle of the 20th century, 500,000 African wild dogs were spread across sub-Saharan Africa. Today between 3,000 and 6,000 animals remain. Most are limited to the south and east of their original range.

The African painted dogs at the Oregon Zoo are part of the Species Survival Plan administered by the Association of Zoos and Aquariums (AZA).

How you can help the African painted dog