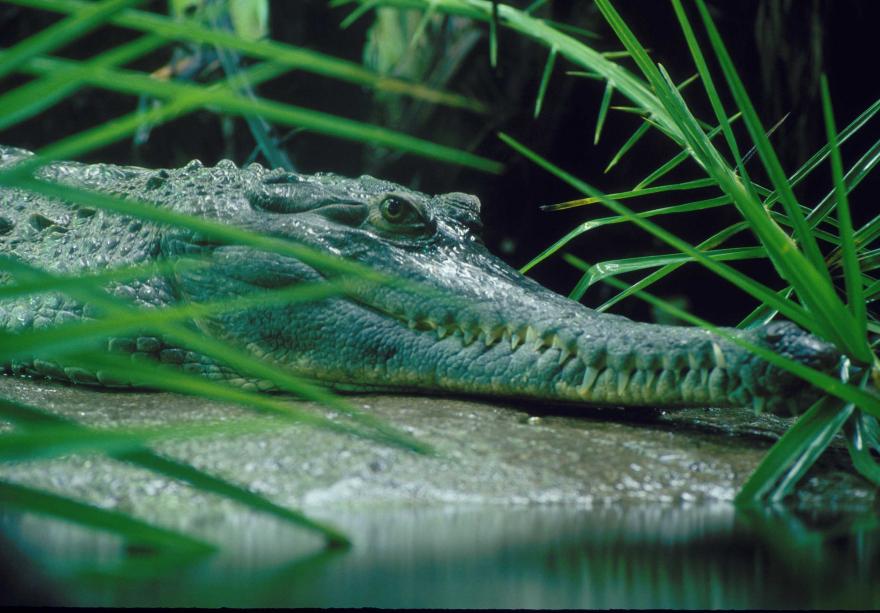 African slender-nosed crocodiles live in freshwater rivers and streams in the tropical forests of Central and West Africa.

The life of an African slender-nosed crocodile

Slender-nosed crocodiles grow up to 13 feet long and weigh up to 500 pounds. Their skin is protected by scales, and their back scales are armored with bony plates. They have rows of razor-sharp teeth in powerful jaws. They swim using their tails. Underwater, their eyes are protected by an extra set of semi-transparent eyelids. On land, they belly-crawl through mud and stand up on all four legs to "high walk" over rough terrain. They sometimes climb several feet into the limbs of streamside trees.

Slender-nosed crocodiles hunt while almost completely immersed, with just their eyes and nostrils above the surface—but they can see, smell, and hear everything going on around them. Their snouts act like tweezers to remove prey from holes and small crevices. When they see prey, they lunge and hold onto it with their jaws and teeth. They especially like fish but they will also eat frogs, shrimp and crabs, snakes, water birds and mammals. They even go after bigger mammals that come to the river to drink.

Male crocodiles hunt alone, and they compete with each other, growling and bellowing at each other with a banging sounds like a car backfiring. They show dominance by raising their bodies out of the water to look bigger. Mating season is the only time males live near females.

The female usually lays her eggs during rainy season. Finding a spot on the riverbank, she builds a mounded nest with plant matter and lays between 13 and 27 large, hard-shelled eggs. She stays nearby as the eggs incubate for about 110 days. The hatchlings chirp as their mother helps them get free of the eggs. Information about the hatchlings is scanty, but biologists think they probably stay near their mother for at least two years, and that she might care for multiple "floats" or "pods" of her young at a time.

As of 2014, the African slender-nosed crocodile is listed as critically endangered by the IUCN, the International Union for Conservation of Nature. It is hunted for its skin and other products, and it is losing habitat to deforestation and degradation.

How you can help African slender-nosed crocodiles

Slender-nosed crocodiles live in an area of Africa that is losing forest habitat for several reasons, including mining for minerals used in electronics. You can help them by waiting at least 2 years to upgrade your mobile devices. Learn more.

The zoo's crocodiles live in the Africa Rainforest. At the beginning of feeding time they are separated, then fed on a diet of fish and rats. 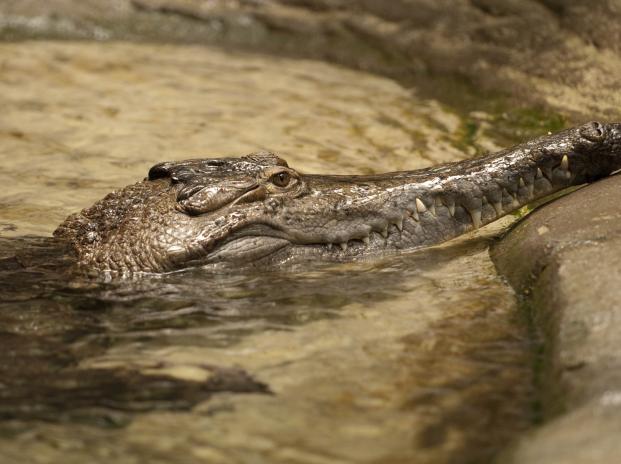 Morgan is a female African slender-snouted crocodile born on Sept. 22, 1986. She and Lance are often observed blowing bubbles from the corner of their eyes to equalize pressure while underwater...