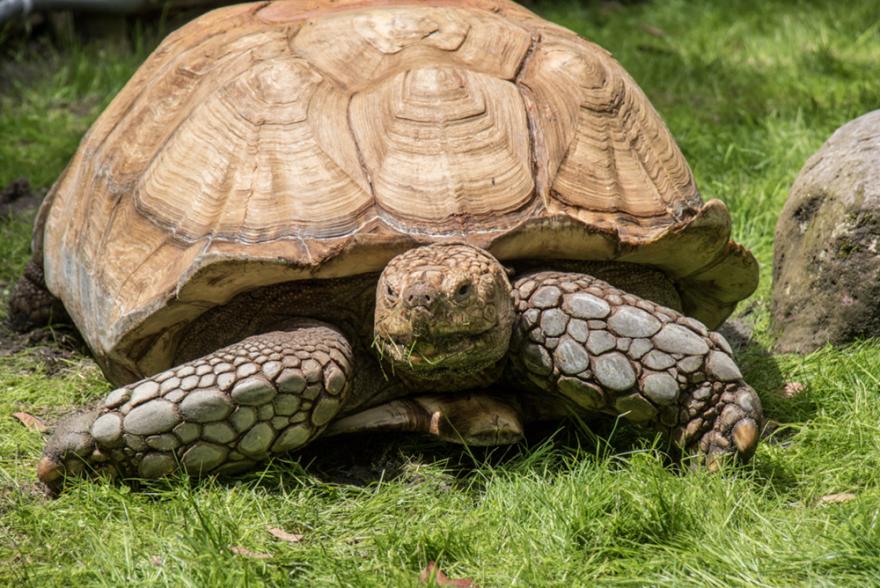 The African spurred tortoise lives in semi-arid grasslands, scrub and savannah areas along the southern edge of the Sahara Desert in Northern Africa. It is the third largest tortoise in the world, and the largest on the African continent.

The life of a spurred tortoise

The spurred tortoise is sand-colored with an oval carapace, or shell. Its name comes from the overlapping scales on the front of its forelimbs and the 2-3 cone-shaped spurs on each thigh. The carapace of adults averages 18 inches in length, but can be as much as 2 or 3 feet long. These tortoises weigh an average of 70-100 pounds, but can weigh up to 200 pounds. 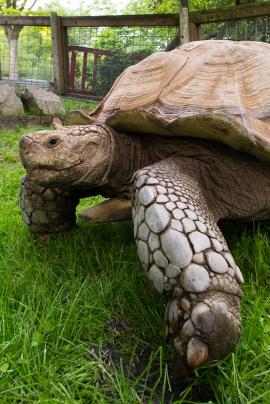 Spurred tortoises have adapted many ways to thrive in extreme heat. They dig burrows in the ground and shelter there during the hottest part of the day. Most burrows are about 30 inches deep, but some individuals dig tunnel systems reaching 10 feet or more underground. The burrows are relatively cool and damp and help keep the tortoise from drying out.

Spurred tortoises are most active between July and October, when it is a bit cooler in their habitat. After spending the early morning basking in the sun to raise their body temperature, they go out to forage for plants and grasses. During the driest, hottest time of the year, spurred tortoises lower their body temperature and slow down their metabolism, a state called torpor. Like most reptiles, they have a low resting metabolism, and don't need much fuel at this time. When they aren't moving, they can go weeks without food.

These big tortoises can withdraw completely into their shells, but they are more threatened by their harsh habitat than by predators. They are very aggressive towards one another, especially at breeding season. Males are commonly seen ramming into each other and trying to flip each other over.

Mating season for spurred tortoises is between September and late November. About 60 days after mating, the female starts looking for a nesting site. Because the eggs need to incubate at 86 to 88 degrees Fahrenheit, it may take her up to 2 weeks to find the best spot. Once she's chosen the site, she spends several hours making the nest, which is about 2 feet wide and 3-6 inches deep. She lays one egg every 3 minutes until she has a clutch of 15 to 30. Then she carefully fills in the nest, covering all the eggs. The baby tortoises hatch after about 8 months. They are only 2 to 3 inches long at birth, but grow quickly. They take 15 years to reach full maturity.

Thanks in part to their slow metabolism and the fact that they don't spend energy keeping themselves warm, spurred tortoises can live to be 150 years old.

African spurred tortoises are listed as vulnerable by the International Union for Conservation of Nature (IUCN) the world's leading conservation organization. They are threatened by habitat loss and over-collection for the pet trade.

How you can help the spurred tortoise

Turtles and tortoises worldwide are facing an extinction crisis. As a consumer, you can take a stand against the illegal wildlife trade by avoiding products made from real tortoiseshell, such as barrettes, brushes, ornaments or jewelry. Learn more about which wildlife products to avoid, and which to always question, on the U.S. Wildlife Trafficking Alliance #BuyInformed website.

The spurred tortoise at the Oregon Zoo

The zoo's spurred tortoises live in the African Savanna.