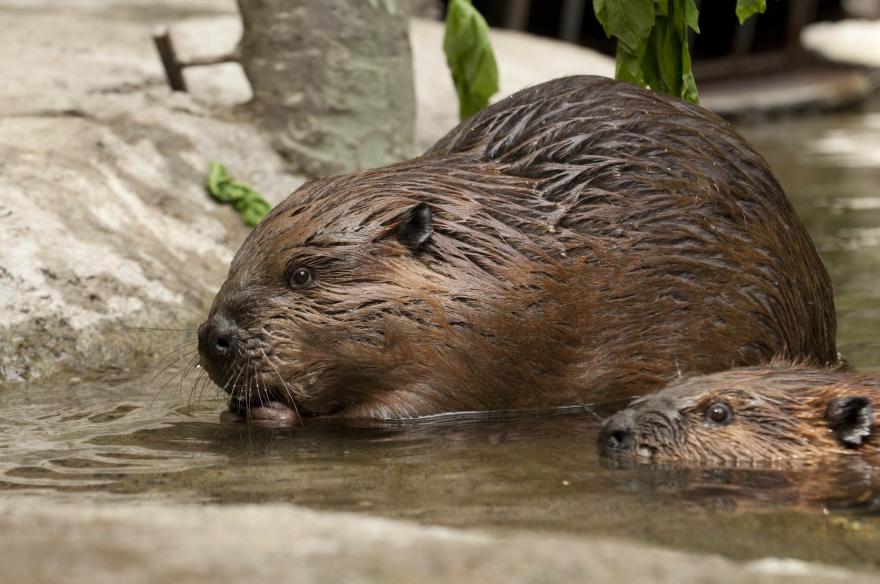 Beavers are found in streams, rivers, marshes and small lakes throughout most of North America, Northern Mexico and western Canada. At up to 60 pounds, they are the largest rodents in their range.

The life of an American beaver

The beaver's body is wonderfully adapted for swimming in cold water. The top layer of its fur is waterproof, and its undercoat traps air and keeps its skin warm. Its back feet are webbed for swimming, and its tail provides steering and power. While it swims, a transparent membrane covers the beaver's eyes, and valves in its nostrils and ears keep the water out. 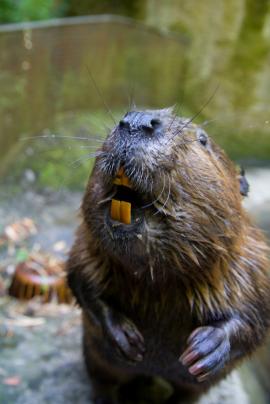 Beavers are secretive, going out at sundown and returning home at dawn. They eat the juicy green inner bark of trees and woody shrubs and the roots of tuberous aquatic plants. Contrary to popular belief, they don't eat wood. They do, however topple large trees to get at food and building materials using nothing but their front teeth and the powerful muscles of their lower jaws. They can fell an 8-foot tree in five minutes. Their teeth keep growing throughout their lives, and must be worn down with chewing.

Beavers build dams of wood, grass, and mud to slow down the flow of water in streams and rivers. The dam creates an area of still water where they can build a lodge. Essentially a pile of mud and sticks, the lodge has an inner chamber that rises above the surface of the water. It has at least 2 underwater entrances.

Beavers are often monogamous and live in family groups of six or more, including parents, yearlings and kits. This group is called a colony. Both parents provide food for their offspring and protect them from predators. Adolescents live with their parents for up to 2 years, helping with infant care, food collection, and dam building.

The female has her first litter at about 3 years of age. After a gestation of 130 days, she gives birth to a litter of 2-4 babies, called kits. The kits weigh from ½ to 1 ½ pounds at birth and are born fully furred, with their eyes open. They can swim within 24 hours. After several days, the kits can dive out of the lodge with their parents to explore the surrounding area. They stay with their parents until the spring of their second year. Beavers live up to 24 years in the wild. 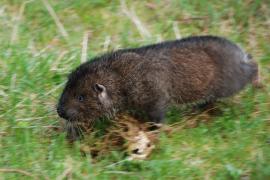 Beavers are sometimes mistaken for two other rodents that look somewhat like they do: The nutria (Myocaster coypus) is native to South America. There was a high demand for nutria fur beginning in the 19th century, and the nutria has been introduced almost worldwide, including here in Oregon. Nutria live in marshes and lakes, like beavers do, but they look like large, chubby rats with long, rounded tails.

Mountain beavers (Aplodontia rufa), pictured right, are not really beavers, but they do gnaw bark and cut off limbs like beavers do. They are native to the Pacific Northwest and the Cascade Range and live in moist forests, rather than in the water. They are smaller than American beavers and don't have tails.

In the 19th century, American beavers were hunted and trapped for their fur; by about 1900, they were almost gone from many of their original habitats. Pollution and habitat loss also affected their survival. In the last 100 years, thanks to re-establishment programs and hunting regulations, beavers have made a very successful comeback. They are now listed as of Least Concern by the International Union of Conservation of Nature (IUCN). Ongoing threats to beavers include habitat destruction, water pollution and hydroelectric dams.

How you can help the American beaver

Beavers are among the many species that call the greater Portland region home. As a site steward, you can help keep their habitat healthy by volunteering to monitor wildlife, clear invasive species or plant native shrubs. Learn more.

American beavers at the Oregon Zoo

The Zoo's beavers live in the Cascade Stream and Pond habitat. To make their environment as much like the wild as possible, keepers anchor branches to the beach or clamp the branches upright for them to chew. The beavers fell them by gnawing on them at their base. To help keep their teeth safely worn down, the beavers are fed rodent chow, monkey chow, carrots, apples, yams and a large variety of fresh browse consisting of leafy tree branches and bark covered logs.