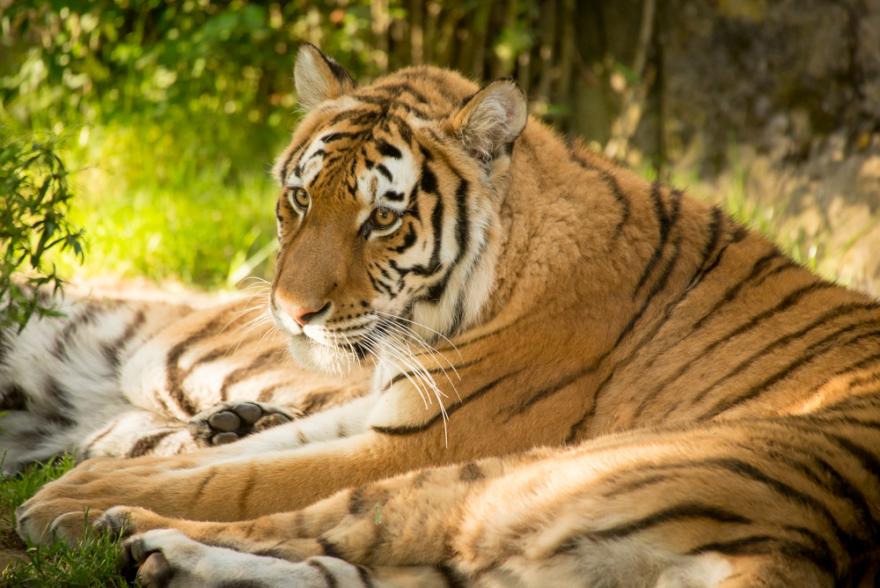 The Amur tiger (formerly known as the Siberian tiger) is found only in the mountain forests of eastern Russia, with a small population ranging across the border into China. This tiger subspecies is adapted to the region's high latitude, harsh climate, and long winters.

The life of an Amur tiger

Amur tigers are the largest cats in the world. A male Amur tiger can weigh up to 450 pounds and grow to be 10 feet long from head to tail. Males are larger than the females, which weigh 240 to 290 pounds. 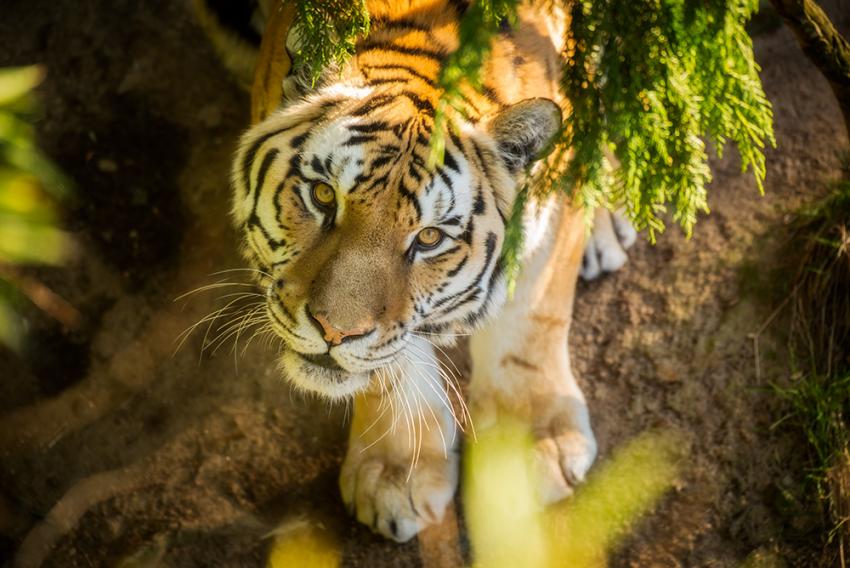 Like human fingerprints, the striped pattern on each Amur tiger's fur is unique to that individual. Their fur is lighter than other tigers' fur, and it becomes even lighter in winter. To protect them from the cold, their fur grows thicker than other tigers' fur, and they have manes. Thick fur on their paws keeps their feet warm, allows them to walk silently as they stalk prey, and makes their feet behave like showshoes as they move through the snow. Their long claws are retractable, which allows them to run easily and quickly.

Amur tigers live alone, marking their scent on trees to keep other tigers away. When hunting they rely more on sight and hearing than smell. They hunt for elk, boar, and deer, stalking them until they are close enough to pounce. They drag their kill to a secluded area before devouring the meat.

Because of naturally low numbers of prey animals in eastern Russia, Amur tigers have large hunting areas. Females range between 95 and 170 square miles, sometimes dividing it up with their daughters. Males' territories can be up to 770 square miles and may overlap with several females' territories.

Female Amur tigers are ready to mate at about 3 years of age. Pregnancy lasts 3 to 3 ½ months for a litter of 1 to 5 cubs. The female begins teaching her cubs to hunt at about 3 months.

Amur tigers live 10 to 14 years in the wild. In captivity they can live up to 20 years, but their average life expectancy is 14-16 years.

About 400 Amur tigers are left in the wild, and they are listed as endangered. They are threatened by habitat loss and poaching of both tigers and their prey, as well as tiger-human conflict and infectious diseases. Most of the 150 Amur tigers in North American AZA facilities are part of conservation breeding programs, including the Species Survival Plan in the United States.

Amur tigers at the Oregon Zoo