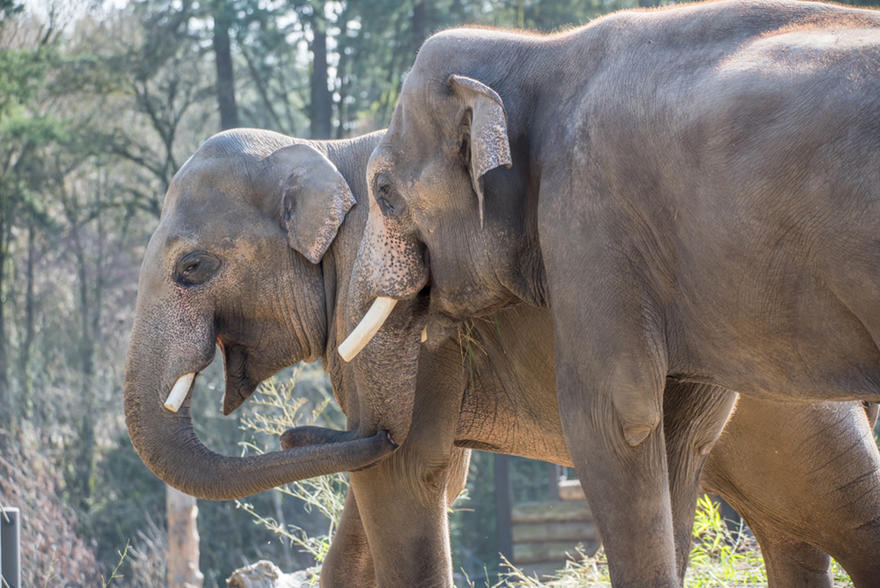 Asian elephants are native to the scrub forests and rain forests of India, Nepal, and parts of Southeast Asia.

At 6,000 to 13,000 pounds and 7-10 feet high at the shoulder, Asian elephants are among the largest living land animals, but are smaller than their African relatives, with smaller ears and rounded backs.

Humans have worked with Asian elephants for around 5,000 years. Today, roughly a third of the world population of this endangered species lives under human care.

Life of an Asian elephant

Elephants live in close social groups called herds, where they form strong bonds with each other. Females and calves live in multigenerational herds, while adult males spend time on their own and in "bachelor" herds.

As highly intelligent and social animals, Asian elephants communicate with each other in several ways. Sounds include snorts, barks and roars as well as very low frequency rumbles used to communicate over distances of more than five miles. They also use their highly sensitive trunks to communicate by touch.

Wild Asian elephants spend up to 16 hours a day grazing on shrubs, grass, fruit, leaves, twigs and bark, eating a total of between 4 and 6% of their weight each day. When necessary, they can walk up to ten miles a day in search of food.

Females, called cows, are pregnant for 20-22 months, the longest pregnancy of any mammal. Each member of the herd plays a role in the calf's upbringing and care. Newborn calves are about 3 feet tall and weigh up to 300 pounds. They stand on their own very soon after birth and follow their mothers within a few days. 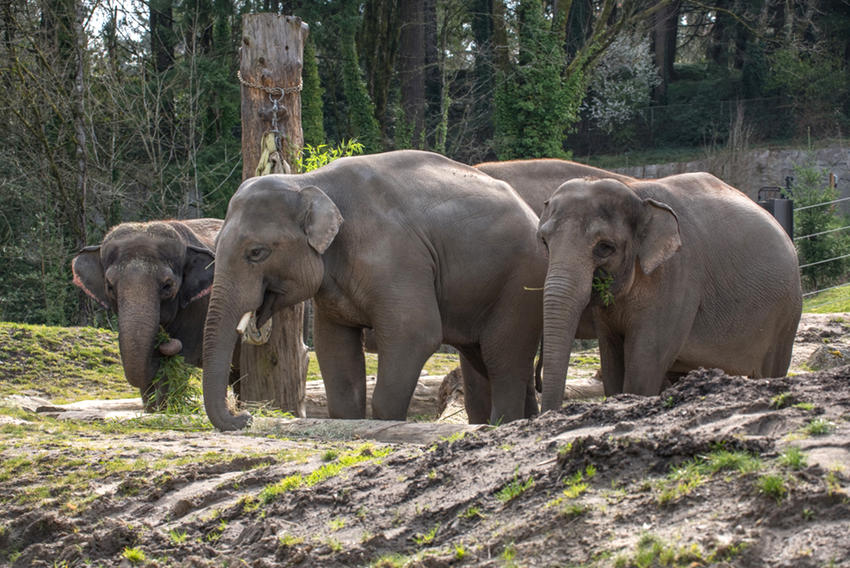 Under human care, Asian elephants' complex lives must be supported through specific social groupings and large spaces that offer a variety of choices.

Completed in 2015, the Oregon Zoo's Elephant Lands habitat was designed around the social structure of elephants. Throughout the habitat, feeding stations, mud wallows and water features encourage the elephants to be active 14-16 hours a day. To protect their sensitive feet, the entire habitat is covered in sand to a depth of four feet.

At Elephant Lands, the herd experiences dry, warm to hot summers and cool, wet winters. The habitat allows the herd to wander freely between three interconnected outdoor spaces and Forest Hall - one of the world's largest indoor elephant spaces. The elephants swim 12 months a year, and will even venture out to play during Portland's rare snow days. Forest Hall is kept at a constant temperature of 70 degrees.

The bulls and the female group choose when to spend time on their own, with each other and near or away from people.

The Oregon Zoo's elephant staff brings more than 140 years of experience caring for Asian elephants. Using verbal cues and positive reinforcement, staff train each elephant to participate in its own care, from bathing to receiving health checks. Caretakers use verbal cues with the herd, as well as lightweight sections of bamboo that are used as "targets" to communicate specific information. For example, a caretaker can check an elephant's foot by asking it to touch its foot to the target. This training builds trusted relationships, and enables the elephants to participate in their own care. 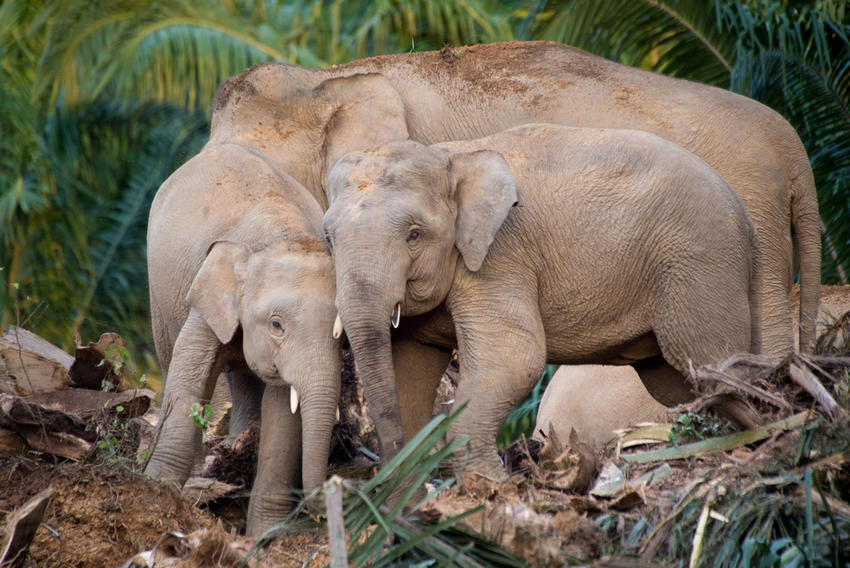 Asian elephants live in some of the most densely human-populated regions of the world, which puts them in frequent and sometimes deadly conflict with people. Logging, development and agriculture to produce crops such as oil palms have drastically reduced elephant habitat throughout Asia. Poaching for ivory, skin and other products is now a growing threat to Asian elephant populations.

The Oregon Zoo contributes to the welfare and conservation of Asian elephants throughout their range, with a focus on Borneo. There, the zoo partners with wildlife officials to improve care practices and supports human-conflict mitigation efforts in addition to reforestation and research projects.

How you can help Asian elephants

You can take action for the survival of Asian elephants by spreading awareness and using your power as a consumer. Learn more.

Asian elephants at the Oregon Zoo 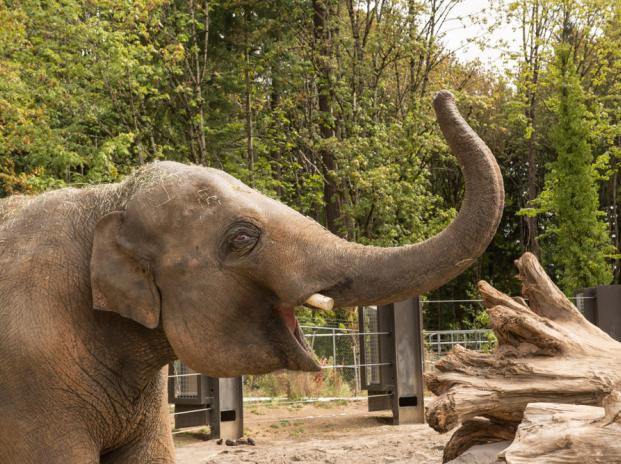 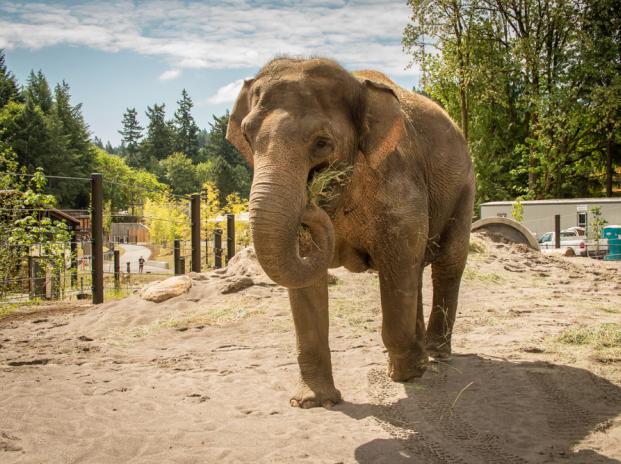 Rose-Tu is a female Asian elephant. She was born on August 31, 1994 at the Oregon Zoo to Hugo and Me-Tu. Rose-Tu is the second smallest of the cows. ... 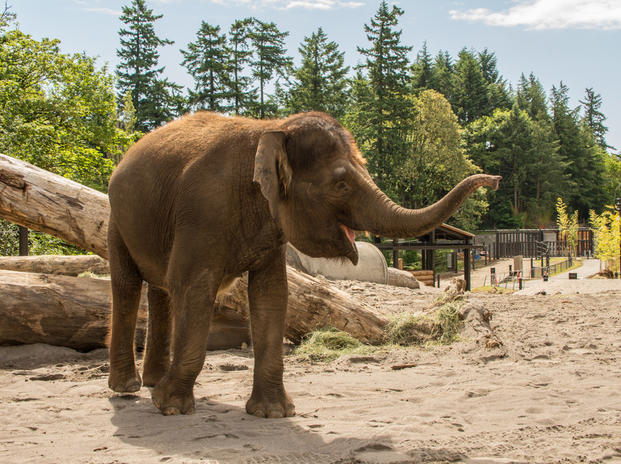 Chendra is a female Asian elephant born in Sabah, Malaysia in 1993. She is the only Borneo pygmy elephant living in the U.S. Borneo pygmy elephants number only about 2,000 in the wild and are highly threatened by habitat loss and fragmentation. She was found wandering –orphaned, alone, and hungry—near a palm oil plantation in Borneo... 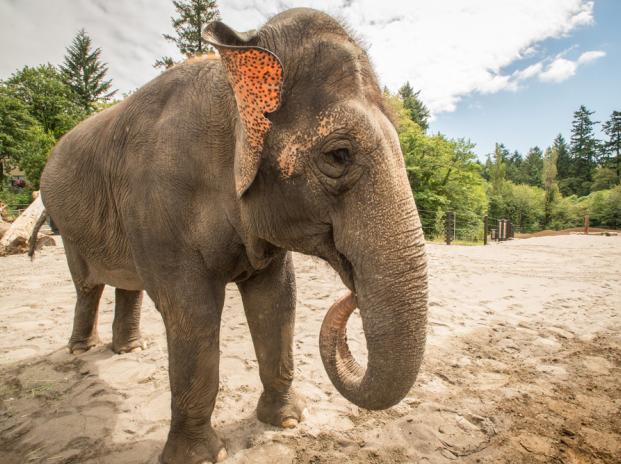 Sung-Surin, nicknamed “Shine,” is a female Asian elephant. She was born on December 26, 1982 at the Oregon Zoo to Packy and Pet. Sung-Surin means “sunshine” in Thai. She is distinguished by a slit in the lower margin of her right ear... 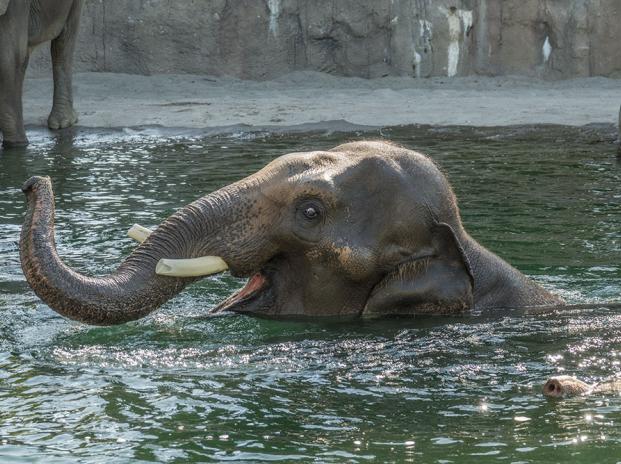