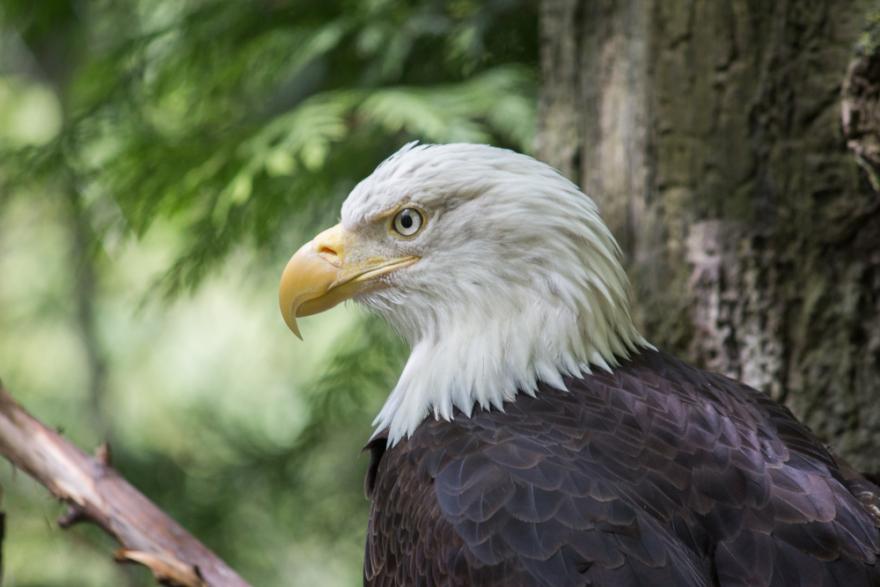 Bald eagles range throughout North America, most often along the coast or near other large water sources. They are one of the largest bird species in this area, second only in size to the California condor.

The life of a bald eagle

As predators at the top of the food chain, bald eagles are adapted to both hunting and scavenging. Their keen eyesight lets them spot their prey from the top of a tall perch or while soaring high in the sky. 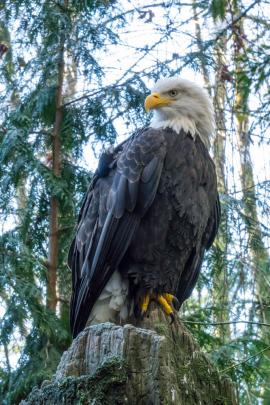 Bald eagles kill their prey by combining powerful legs and feet with strong talons. Their sharp pointed beaks are perfect for ripping and tearing prey into bite-sized pieces. They commonly hunt fish but will also eat ducks, other water birds and small mammals.

Here in the Pacific Northwest, bald eagles often eat dead and dying fish, especially spawned salmon, which they pick up from stream sides. They also eat carrion and steal prey from other predators, sometimes right out of the air. This regular thievery is one of the reasons Benjamin Franklin spoke against them as our national bird.

These long-lived birds will stay with the same mate for a long time, but if their current mate is lost or dies, they quickly find another. After choosing a mate, the male and female perform a courtship dance in the sky. They lock on to each other's talons and tumble and twist in the air—then let go of each other just before hitting the ground! After this dramatic beginning, the pair finds a nesting spot near good fishing, with large trees and no humans close by.

Bald eagles usually build their big stick nests, called "eyries," in high trees or on cliffs. They average about 5 feet in diameter. The eagles return to the same nest each year, adding more twigs, grass, moss, feathers, and branches to the original nest until it becomes enormous. The largest known eagle nest was 9 feet across, 20 feet deep and more than two tons in weight!

Once the nest is completed, the female lays one to three eggs, several days apart. The parents take turns keeping the eggs warm constantly until they hatch. Both of them help care for the eaglets. Young eagles fledge at 10 to 12 weeks, but they don't reach full adult plumage, with the distinctive white head, until they are 4-6 years old.

Bald eagles live between 15 and 25 years in the wild, 30 or more years in human care.

Bald eagle populations dropped drastically during in the early and middle 20th century, mostly because of pesticides, especially DDT. After DDT was banned in the 1970s, bald eagles made a dramatic comeback.

How you can help bald eagles

If you are a hunter, you can help bald eagles by using lead-free ammunition.

Bald eagles at the Oregon Zoo

You can find Jack and Reetahkac in the Eagle Canyon exhibit. 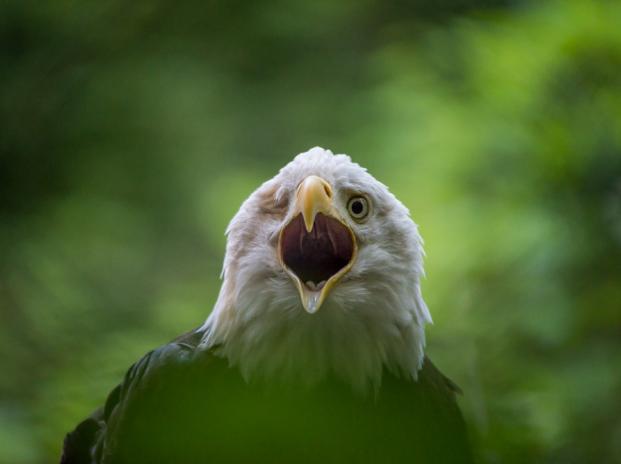 Jack, a male bald eagle, was found on the Lummi Reservation in Bellingham, Wash., with permanently damaged secondary feathers and only one eye. He leads an active live despite limited flying abilities. ... 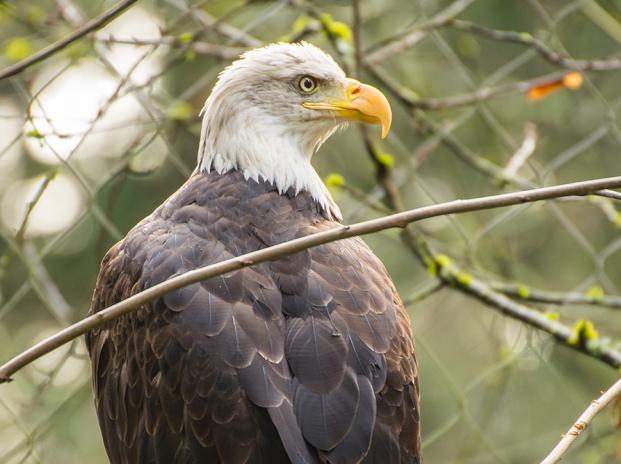 Reetahkac (pronounced Rate-a-kats, Pawnee for eagle) is a female bald eagle that came to the Oregon Zoo after she was injured and deemed non-releasable by wildlife authorities in Wisconsin. The 3-foot-tall eagle was discovered by hikers in Wisonsin's Vernon Wildlife Area. She had sustained a deep puncture wound in her left eye, and was also suffering from severe lead poisoning...