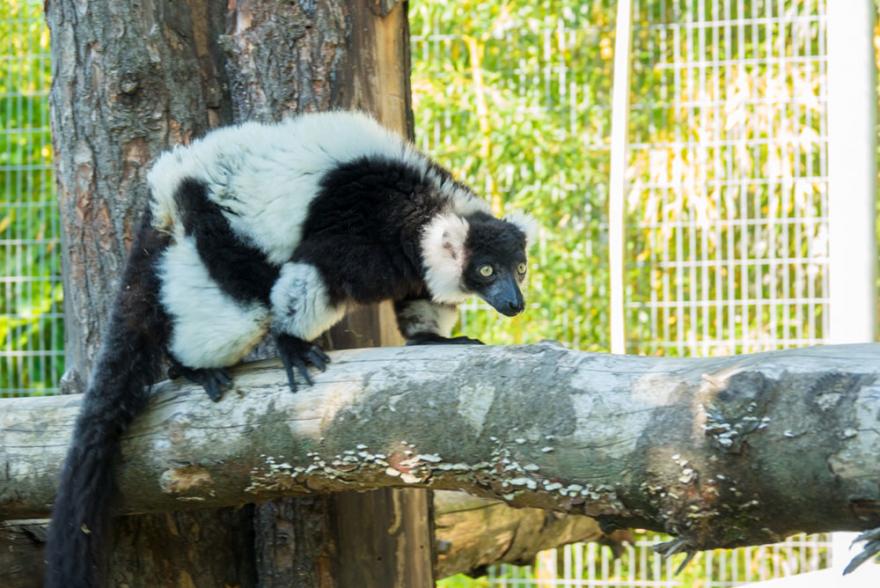 Black-and-white ruffed lemurs live in the rainforests of eastern Madagascar.

With their forward-facing eyes and long snouts, lemurs look like foxes. They're actually prosimians, a distinct suborder of the primate family, separate from monkeys and apes. Prosimians have many unique features, including wet noses and a keen sense of smell.

The life of a black-and-white ruffed lemur

Black-and-white ruffed lemurs are one of the biggest of the lemur species. They weigh up to 9 pounds, and grow to be 22 inches in length. Their tails are longer than their bodies. Thick fur keeps them warm when it's wet and chilly in the rainforest. They spend a lot of time grooming themselves and each other. They use their bottom six front teeth as a "tooth comb" and the second toe of their back feet as a grooming or "toilet" claw.

Black-and-white ruffed lemurs are active in the morning and late afternoon. They spend most of their time in the trees, leaping from branch to branch to eat fruit and nectar. They often hang by their feet to reach ripe fruit or nectar from tree flowers.

These big lemurs help re-seed the rainforest. Some of the fruit they eat has big seeds, which pass through their gut and get pooped out on the forest floor. They're also pollinators. When they feed on nectar, they open the flower and bury their snout in it, getting pollen all over their noses. They transfer the pollen from their noses to the next set of flowers as they move to the next tree.

Black-and-white ruffed lemurs live in small family groups of 2 to 5, and often join other families to make troops of up to 16. They use several calls to communicate. When they're warning each other about a predator, their calls are loud enough to be heard more than a half-mile away. Once one member of the group starts calling, the others often join in. They also use scent-marking to greet each other, and to communicate about location, identity and sex.

Females give birth to 1 to 4 pups after a gestation of 90 to 120 days. The pups are already covered with fur when they're born, and their eyes are open. The mother makes a nest for them up in the trees, and they stay there about 4 months. She carries them in her mouth if she needs to move them. Other females and males in the group help take care of young lemurs.

Black-and-white ruffed lemurs live between 15 and 20 years in the wild.

Black-and-white ruffed lemurs are critically endangered. Their numbers have dropped more than 80% in the last 21 years. Their biggest threat is deforestation.

These beautiful lemurs and the rainforests they live in are connected. Losing them means there are fewer of them to pollinate and spread tree seeds. That's why, as their numbers decrease, the rainforest itself is at risk.

How you can help black-and-white ruffed lemurs

You can help black-and-white ruffed lemurs by looking for the FSC (Forest Stewardship Council) label on furniture and paper to guarantee that your wood product is friendly to forests.

Oregon Zoo participates in Species Survival Plans (SSP) for our lemurs. An SSP is a "matchmaking" tool designed to manage the breeding of threatened species to keep their populations healthy and genetically diverse.