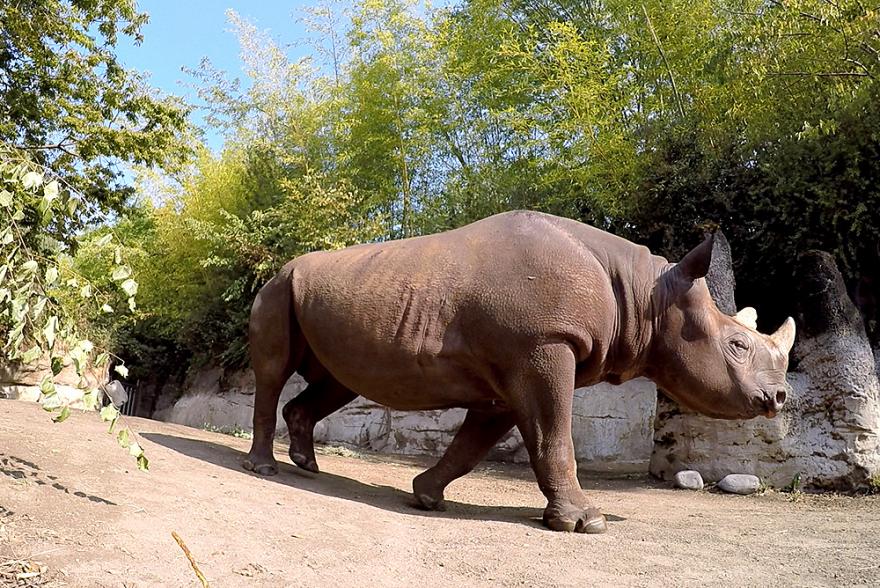 Black rhinos live in the grasslands, savannas and forests of southern Africa from Somalia to South Africa. Because they are poached throughout their range for their horns, they are among the most endangered mammals in the world.

The life of a black rhinoceros

Black rhinos can measure up to 10-12 feet long and weigh up to 3,000 pounds. Their legs are short but they can run up to 30 miles per hour. Their two horns are fibrous keratin, the material found in human hair and fingernails. They use their horns to defend against predators, and males also use them in fights with each other over territory. Their dark gray skin takes on the color of the soil as they bathe in mud and dust to keep cool.

Black rhinos use their keen sense of hearing and smell to detect predators. Because their eyesight is poor, they count on the alarm calls of other animals. The oxpecker, for example, is a bird that eats the ticks and parasites from the rhino's back, and raises an alarm when it sees a threat to the rhino.

Black rhinos feed on the leaves and twigs of woody plants and herbs. They use their prehensile lip to grab leaves and guide them into their mouths, then use their cheek teeth to chew it up. They also use their horns to reach higher branches, break or knock down plants, or scrape bark off of trees. They eat between 50 and 60 pounds a day.

Dominant males, called bulls, patrol and aggressively defend a small, exclusive territory, marking it with urine and dung. Fights over territory between males can be fatal. Females are not territorial and move through large home ranges that overlap with other females. To choose a male, all a female has to do is go to his territory when she's ready to mate.

Females reach sexual maturity at age 5-7 and have a single calf every 2 years. Pregnancy lasts 15 to 16 months, and each calf tends to remain with its mother until the birth of her next offspring. Although wobbly at first, the newborn is soon able to stand on its feet. Calves weigh about 88 pounds at birth. Black rhinos live an average of 35 years in the wild.

Black rhinos are among the most endangered mammals in the world, primarily because of a recent resurgence in poaching them for their horns. In several Asian countries, rhino horns are used in traditional medicine as a cure for many ailments. One rhino horn can bring up to $24,000. In some Arabic countries, the rhino horn is used symbolically to indicate manhood. In 1970 there were approximately 65,000 black rhinos in the wild; currently there are only about 3,500.