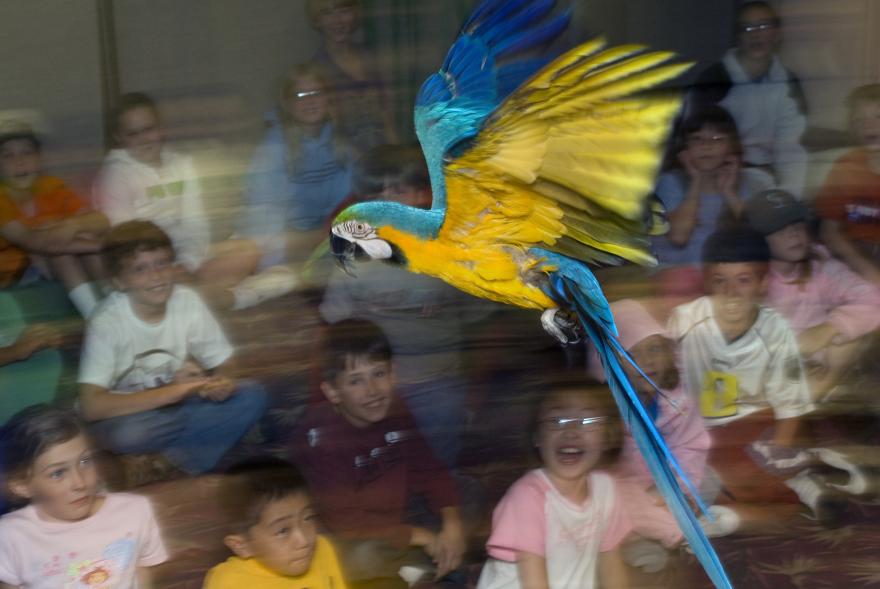 Back and upper tail feathers are brilliant blue; the underside of the tail is olive yellow. Forehead feathers are green. Wing feathers are blue with green tips; underwing coverts and breast are yellow-orange. The bare facial area is creamy white with several lines made of small black feathers. The beak is gray-black; the throat black. Eyes are yellow and legs are gray.

Macaws, the Oregon Zoo and you

Pele, a blue and gold macaw, is part of the zoo's Wild Life Live show. He was hatched in 2000 and arrived at the zoo in 2004. During the show, Pele laughs, waves, shakes hands and falls backward on command. Like Pele, all blue and gold macaws are intelligent birds. They show emotions or intentions by cocking their heads, vocalizing, flashing their eyes (by a voluntary constriction of the pupils) and blushing. They also use fluffing of the feathers, raising the wings, prancing, bowing, shaking their tail feathers, and head bobbing as forms of communication.