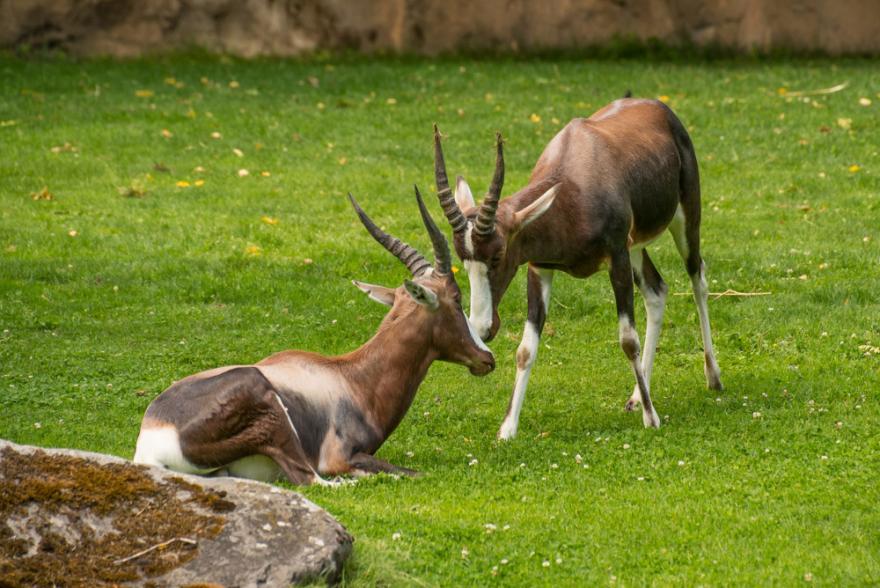 The life of a bontebok

Bontebok are 31-39 inches high at the shoulder and weigh between 150 and 180 pounds. Males are slightly larger and heavier than females. The horns of both sexes can reach 19-20 inches in length, although the female's horn is more slender than the male's.

These handsome animals spend their day feeding on short grass, but they are less active during the hot hours in the middle of the day. When they live in a large enough ranging area, they travel in loose and changing herds. Small nursery herds of two to eight females and their young usually remain with the same territorial male all year round.

Males fight other males to defend their "harem." They mark territory with dung and urine and display dominance by standing sideways to an intruder, digging up soil with their horns, stamping their feet and swinging their heads. The occasional horn clashing interaction between two aggressive males can be fatal to the loser.

Bontebok mate between January and March, and lambs are born from September to October. The female is pregnant for 8 months, and the lamb is up and mobile within an hour or so of birth. Females mature in about two years. The median life expectancy of bontebok living in zoos is 11.2 years.

Overhunting reduced the bontebok to 17 wild individuals in the early 20th century. The fact that they are unable to jump has worked to their advantage, as South African game farmers and preserve owners are able to contain them and keep them safe from hunters. Their population has grown to a stable 3,500, all in farms and game preserves.

How you can help bontebok

Bonteboks at the Oregon Zoo