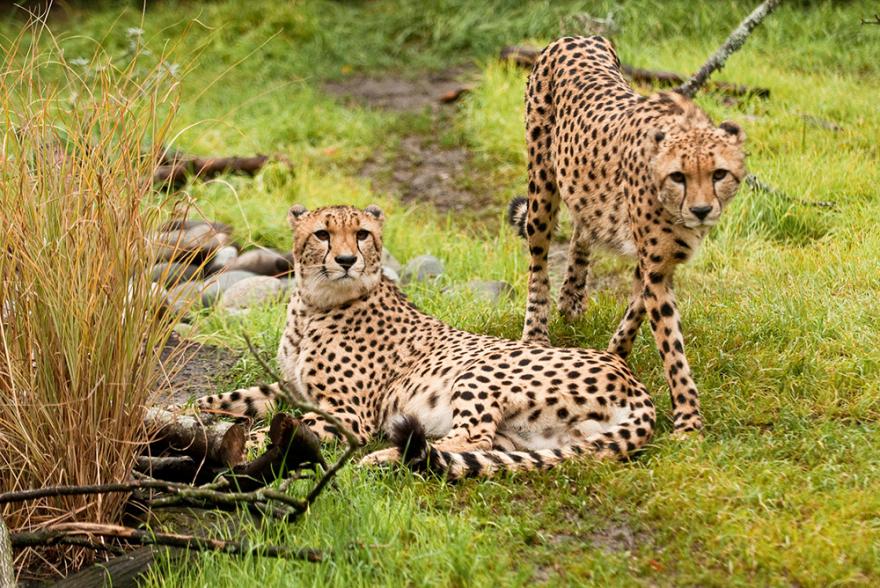 Cheetahs are the world's fastest land animals and Africa's most endangered cats. They live and hunt in the open and vegetated savannas of sub-Saharan Africa.

The life of a cheetah

The cheetah's body is uniquely designed for speed. Its lightweight, narrow frame supports long legs and its flexible spine allows its front legs to stretch far forward with each stride. Like a horse, its large heart fills a deep chest cavity and its large nostrils allow air to easily enter its lungs. A cheetah's long tail functions as a rudder during high-speed chases. Its claws are not fully retractable and act like the cleats of a track shoe, giving the cat traction as it runs. 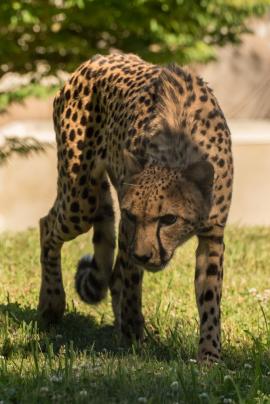 Cheetahs can accelerate from 0 to 60 miles an hour in 3 seconds, cover 20-22 feet in one stride and sprint up to 70 miles an hour. Their bodies are off the ground for more than half their running time. After catching prey, a cheetah pants intensely, and its body temperature can reach as high as 105 degrees Fahrenheit. It can take 20 minutes for its breathing and temperature to return to normal.

Cheetahs hunt in daylight in early morning and late afternoon to avoid competition with lions, hyenas, and other large predators. Medium-sized antelopes make up most of their diet. They choose their prey and move silently to be as close as possible to it before bursting into a chase at full speed. They trip up their prey or knock it down with a front paw, then lunge for its throat and strangle it. They eat the animal immediately because they aren't strong enough to hide or guard it from competitors.

Siblings stay together for about 6 months after leaving the mother, and brothers often stay together for life. Permanent male coalitions, usually made up of 2 to 4 brothers, allow the males to establish and patrol territories; this gives them greater access to females. They get along well except at breeding time, when males have been known to kill each other in fights over females.

Instead of roaring, cheetahs use several calls to communicate with each other. Chirps, purrs, growls, snarls, hisses, coughs, moans, and bleating sounds are used to convey different meanings. Males give a distinctive rhythmic call during breeding season.

The female cheetah is solitary and occupies a home range up to 500 square miles in size. She can begin breeding at age 2. After a pregnancy of 90 to 95 days, she gives birth to 3-4 cubs. The cubs are blind and helpless, and the mother moves them to a new den every few days to avoid predators. At 8 weeks, the cubs are large enough to travel with their mother.

Adult cheetahs are between 3 ½ and 4 ½ three feet long, not including their 30-inch tails. They weigh between 75 and 145 pounds and stand 2 to 3 feet tall at the shoulder. Males weigh about 10 pounds more than females. Cheetahs live 8-12 years in the wild and up to 17 years in captivity.

Cheetahs once lived all across the dry parts of Africa, in the Middle East and in India. Limited now to parts of sub-Saharan Africa and Iran, their current population is between 8,000 and 10,000. Listed as vulnerable, cheetahs are hunted as trophy animals and for their spotted pelts. As humans and their buildings move in, cheetahs suffer from habitat loss and fragmentation. A decrease in available prey animals in some areas forces cheetahs to hunt for livestock, and farmers kill them as pests.

Cheetahs at the Oregon Zoo

The Zoo's cheetahs live in the Predators of the Serengeti exhibit.