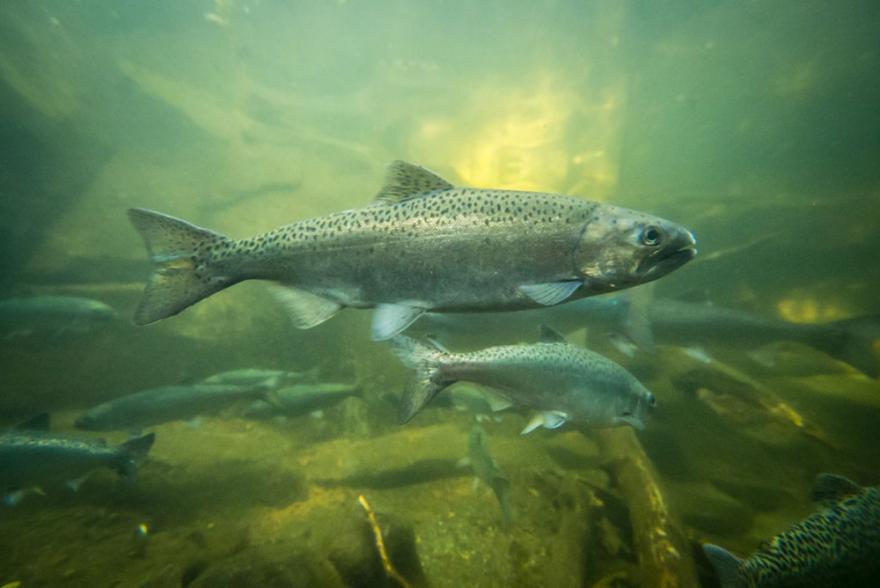 Wild Chinook salmon are found all along the west coast of North America, from Monterey Bay in California to the Chukchi Sea in Alaska. Like all salmon species, Chinook are anadromous—that is, they are born in fresh water, migrate to the ocean, then return as mature adults to lay their eggs in the streams where they were born.

The life of a Chinook salmon

Chinook salmon begin their lives as eggs laid by an adult female in a cold, clean, sheltered stream. The eggs hatch in spring. The tiny fish grow larger as they spend about five months in the stream, eating insects and crustaceans.

When they're big enough, they begin their migration to the ocean. They often spend awhile eating heavily in the half-salt and half-fresh water of an estuary to get even bigger. Once they reach the ocean, they spend up to 8 years there, eating fish. An adult Chinook salmon living in the ocean is the largest of all the Pacific salmon species. It often weighs more than 100 pounds and grows up to 5 feet long.

After several years, Chinook journey back to their home stream to "spawn," or lay their eggs. Their sense of smell leads them home. Biologists believe a spawning salmon can smell its home stream in water that has only 1-2 parts of the stream's chemical signature per million. It's like being able to sniff out a single drop of water in 250 gallons!

Once they arrive in the home stream, the female builds a "redd," or nest. She releases her eggs into the redd, and the male fertilizes it. She covers the eggs with loose gravel and they both swim further upstream to do the process all over again. All the while, their bodies are breaking down, and eventually they both die.

Each year, at approximately the same time of year, a number of adult Chinook salmon return to their natal streams to spawn. In our area, they spawn in the Columbia River and its larger tributaries in the fall, "running" in specific areas of the river. The Chinook that come to the lower end of the Columbia are called "Tules." The upriver Chinook are called "Upriver Brights." You can see Chinook from each group in the zoo's Eagle Canyon exhibit.

Living salmon are food for many kinds of wildlife, from bald eagles to killer whales to grizzly bears. After they die, their bodies provide vital food and nutrients to the plants and animals in the stream ecosystem.

Salmon need cold, clean water to survive. They struggle with pollution, warming waters and habitat deterioration. Dams block their travel to and from the ocean. Metro is working to protect and restore habitat for salmon and other wildlife in the Portland metropolitan area. Learn more about the Natural Areas Program.

How you can help Chinook salmon

You can help Chinook and other salmon species by conserving water. This leaves more water in the local waterways, and helps preserve stream and river ecosystems. Learn more.

Chinook Salmon at the Oregon Zoo

The zoo's Chinook salmon live in the Eagle Canyon exhibit. They are fed a mixture of krill, brine shrimp, chopped fish and insects.