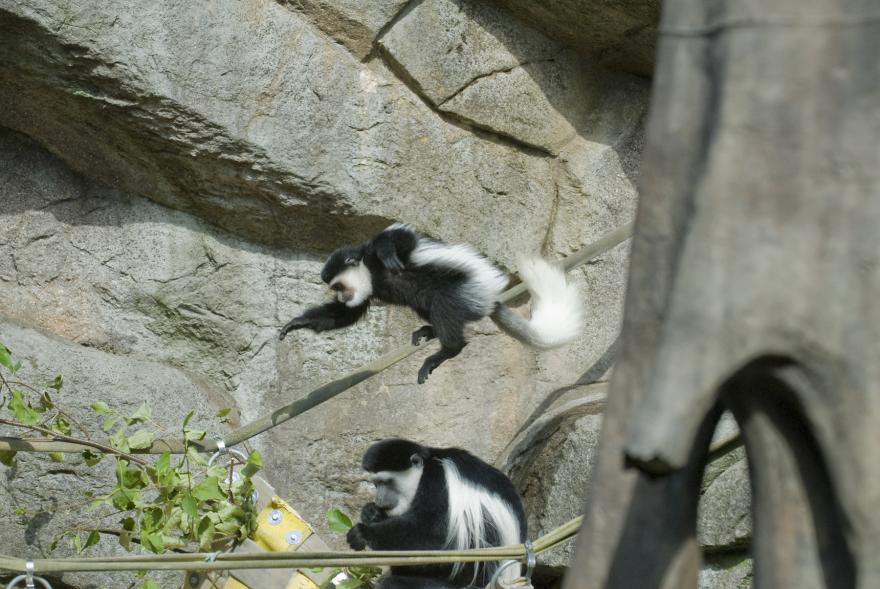 Colobus monkeys live in the forests and grasslands of Central Africa. They are found most often in second-growth or degraded forests or along rivers.

The life of a colobus monkey

Colobus monkeys live mostly in the trees and eat leaves and fruit. To help them digest all that foliage, they have a multi-chambered stomach and gut microbes that break down cellulose. They get water from dew and the moisture in their food, or from rainwater in tree hollows.

Colobus monkeys are unusual for their beautiful black and white coloring. They are 18 to 27 inches long, not counting their tails, and weigh between 12 and 32 pounds. Males are usually slightly bigger than females. With only four fingers and no thumb, they move quickly through the trees.

Colobus monkeys live in small groups usually made up of one male, 3 or 4 females, and related adolescents and infants. Females stay in the group they were born into for the rest of their lives, and infants are carried and taken care of by all the females in the group. Young males leave their family group before they are fully mature, either voluntarily or because the adult male forces them out. Some males go on to lead their own group of females.

The group spends over half the day resting and the remaining hours feeding and moving through the trees.They communicate with snorts, purrs, caws, screams, and tongue clicking. They sleep together at night, spreading out into adjacent trees close to a food source. At dawn and night-time, the dominant male roars loudly, echoed by the other males in the vicinity. These high-intensity roaring sessions communicate dominance and maintain space between groups.

Each group has a well-defined territory of about 40 acres. Conflicts over overlapping territories can be noisy. The males of the two competing groups flap their white fringe fur, leap, cry, roar, and chase each other. In spite of all this dramatic activity, some groups share water holes and other important resources.

Reproduction takes place throughout the year. After a gestation period lasting about 6 months, the mother usually gives birth to a single infant. Colobus babies are pure white; their black fur doesn't appear for several weeks. Babies are 7-8 inches long and weigh a little less than a pound. Their eyes are open, and they cling to their mother's or father's stomach. Both parents are involved in parenting, and for the first few months the baby is the focus of the whole group's attention. Beginning at around 20 weeks, a young colobus becomes increasingly independent.

The colobus monkey is listed as "Least Concern" by the International Union for Conservation of Nature (IUCN). They are still widespread because they can live in degraded forests, but clearance of the forests can be a threat to them, especially in East Africa. In the 1920s and 1930s, they were hunted for their fur, and they continue to be over-hunted and sold in Africa today.

How you can help colobus monkeys

You can help colobus monkeys and other forest-dwelling wildlife by looking for the FSC label when you purchase wood and paper products. Learn more.

Colobus monkeys at the Oregon Zoo

The zoo is home to two colobus monkeys, who live in the Africa Rainforest and share their habitat with the swamp monkeys. Because of their calm nature, the colobus monkeys do very well in this multi-species exhibit. 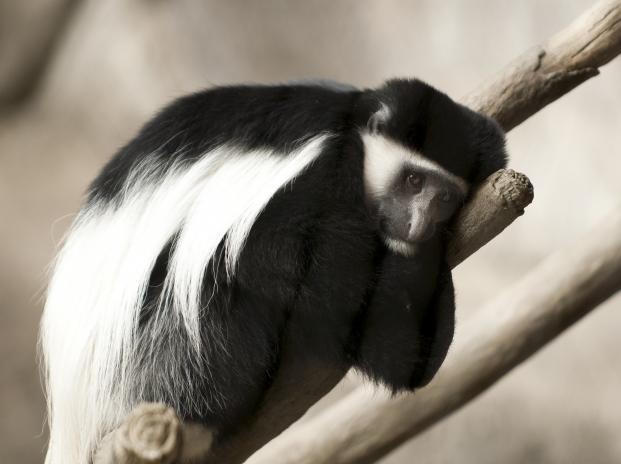 Kiku is a male colobus monkey born in 1991. He arrived at the zoo in 2002. Kiku and his mate of the time, Mali, produced three offspring, including Delu. Kiku is a hands-on dad, offering protection and playing with his children... 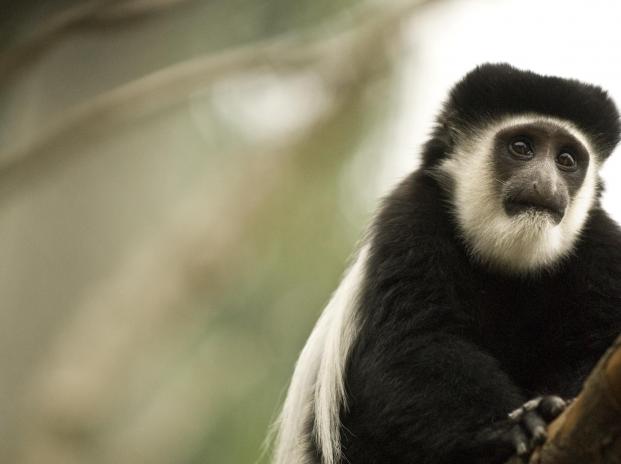 Delu is a female colobus monkey. Kiku is her father...