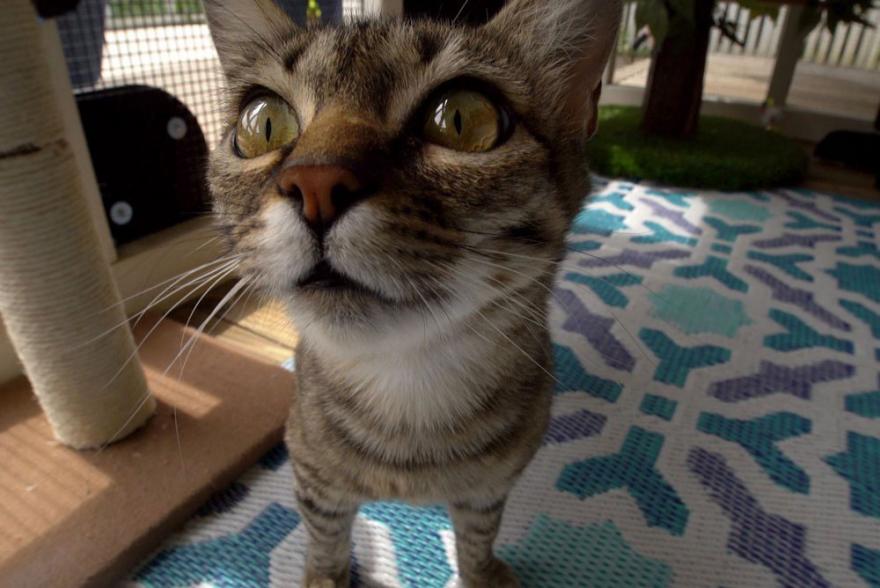 600 million domestic cats live on every continent except Antarctica. They are the descendants of Middle Eastern wildcats, which became domesticated when humans began farming in the region about 10,000 years ago. The relationship was useful to both cats and people.

The life of a domestic cat

Domestic cats are built for flexibility. The 30 bones in their spines have loose joints and springy elastic disks between them. They can twist around completely while falling and land with all four feet on the ground. Their collar bones and shoulder blades are only connected by muscles, not by bone. This lets them slip through very narrow spaces.

Like wild cats, domestic cats can see clearly at one-sixth the light level we would need. You've probably seen a cat's eyes glitter in low light—this is because there's a reflective layer behind their eyes that bounces the light back into their retinas. This makes their night vision especially good.

Cats' other senses are pretty impressive, too. Their sense of smell is about 30 times better than ours, and they can hear higher frequency pitches than dogs can. Their ears move up, down and side to side, amplifying sounds and helping cats figure out where sounds are coming from.

Cats use sounds—meowing, purring, trilling, hissing and growling—to communicate. They also use body language. If you see a cat's ears pointing forward and their whiskers relaxed, they're feeling secure. If a cat is frightened or uneasy, its ears will flatten and it might growl or hiss.

Males will often mark territories—with luck only outside!—by spraying a pungent version of their urine. Neutering a male cat before it reaches maturity can reduce or eliminate this behavior. Both males and females mark areas, objects and people using scent produced by glands near their ears, neck, feet, and the backs of their heads.

Domestic cats are carnivores. Their teeth are adapted for killing prey and tearing meat. They have rough tongues that they use to groom themselves, and to help them clean every last morsel from a food bowl or an animal bone.

Cats will mate any time of the year. After 60-67 days, the female gives birth to up to 5 kittens. The mother takes care of the kittens; the father is not around for this chore. She teaches them how to hunt, groom themselves and get along with other cats.

House cats sleep for 12 to 16 hours in a 24-hour day. They spend up to half their waking hours grooming.

The number one killer of domestic cats is car accidents. Outdoor cats can be attacked by dogs and by coyotes, raccoons, cougars and raptors. They can get into toxins like antifreeze; they can also be exposed to rodent poison ingested by the mice and rats they hunt.

In fights with other cats over territory, outdoor cats can get bites and scratches that become infected. And they can catch fatal viral diseases—like rabies, feline leukemia and feline AIDS—from being in contact with infected cats.

It's important to add that because cats are natural hunters, outdoor cats are a threat to birds and small animals. Outdoor cats kill hundreds of millions of small animals every year, and they are considered the number one cause of bird mortality in the United States and Canada.

How you can help domestic cats

Consider building a catio, a screened enclosure that gives cats access to the benefits of being outside without the dangers. For ideas, check out the zoo's catio, sponsored by Banfield Pet Hospital, located across from the Family Farm.

Get your cat neutered or spayed. Neutered males live twice as long as intact males, and spayed females live 62% longer than intact females.