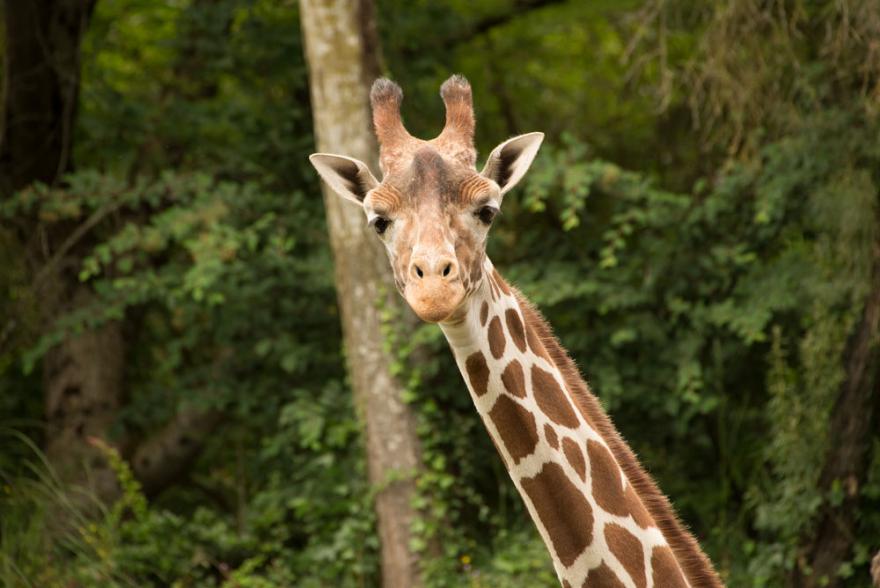 The Oregon Zoo is home to representatives of two subspecies, the reticulated giraffe and the Masai giraffe.

Reticulated giraffes live in open woodlands and wooded grasslands in Somalia, northern Kenya and southern Ethiopia. "Reticulated" refers to the net-shaped pattern of their skin, which camouflages them in dense, dry vegetation.

Masai giraffes range in the savannahs across central and southern Kenya and throughout Tanzania. They have jagged markings that look like grape or maple leaves. Masai giraffes are the tallest of the giraffe subspecies.

The life of a giraffe

The giraffe is the tallest land-based mammal in the world. Males stand up to 18 feet tall and females up to 15 feet tall. A giraffe's necks account for more than half of its height. A giraffe has the same number of vertebrae (neck bones) as humans and other mammals do, but each is more than 10 inches long. The joint that connects the top vertebra to the skull allows the giraffe to tilt its head upward until it is almost perpendicular to the ground. This makes it easy for the giraffe to reach high into the trees for food. 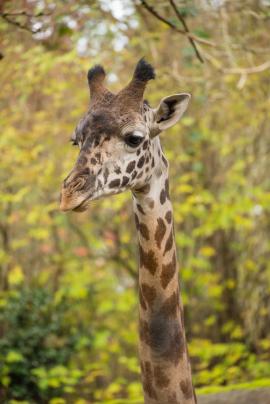 Being tall has its challenges! To get blood up to their heads, giraffes have massive hearts that pump at 2 or 3 times the pressure of a healthy human. Sleeping is usually done standing up because lying down means having to stand up again—an awkward, time-consuming process.

On the other hand, the slow-moving giraffe can gallop 35 miles an hour if needed, and its long front legs are surprisingly sturdy. One kick from a giraffe's hind leg has been known to kill a lion. Large eyes and strong eyesight combines with their great height to allow giraffes to see threats coming from long distances—and to act as natural lookouts for smaller animals like zebras and wildebeest.

Giraffes live in loose herds of 10 to 200 animals. Females with new calves tend to live together, and the calves play together in groups. Young males form roaming bachelor herds. To establish hierarchy and access to females, males spar with each other by standing side by side and thumping their heads into the other male's body. These fights range from gentle to fierce and can end with a giraffe being knocked unconscious.

Giraffes browse on flowers, fruits, herbs, leaves, seeds, new shoots and vines. Using their very long, black tongues and tough lips, they eat up to 75 pounds of browse each day. They get moisture from their diet, but drink every two or three days if water is available.

Female giraffes usually become pregnant for the first time in about their fourth year. Pregnancy lasts 13 to 15 months. They give birth while standing up or walking, so newborn calves drop 5-6 feet to the ground. At birth, a calf is over 6 feet tall from the ground to its shoulders, and can begin to run with its mother about 10 hours later. Calves are weaned at about a year, but stay with their mothers for at least 22 months.

Scientists estimate that over the past two decades, giraffe numbers have dropped across Africa by about 40%. This is due to habitat loss, disease transmitted by livestock, civil war and unrest, and poaching.

Giraffes as a whole are listed as vulnerable by the International Union for Conservation of Nature, but the zoo's two subspecies of giraffes – reticulated and Masai – are listed as endangered.

Giraffes at the Oregon Zoo

The Oregon Zoo's giraffes live in the Africa Savanna habitat. 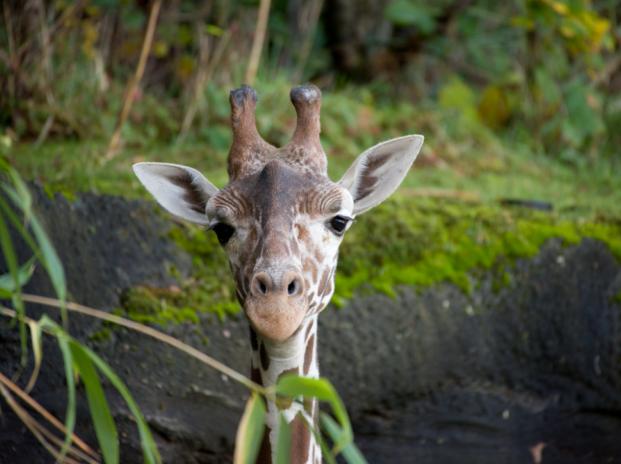 Desi is a 10-foot-tall male reticulated giraffe born on September 10, 2010 at the St. Louis Zoo. He arrived at the Oregon Zoo when he was two, and shares his habitat with a male Masai giraffe named Buttercup... 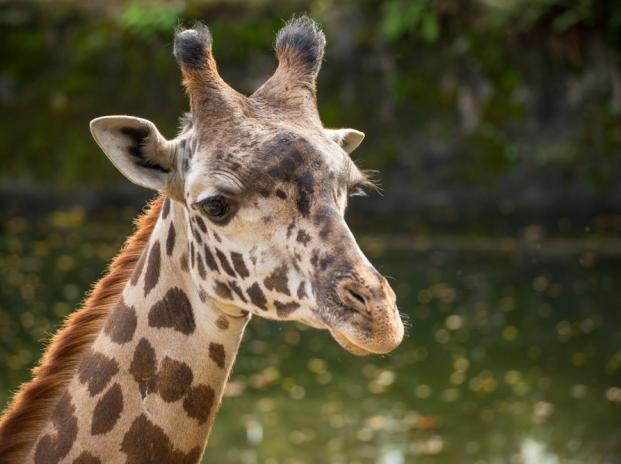 Buttercup was born at the Santa Barbara Zoo on Nov. 13, 2014. He was 6 feet 8 inches tall when he was born, and stood upright with keeper assistance after only about 50 minutes. Buttercup made the move to Portland in October 2016...