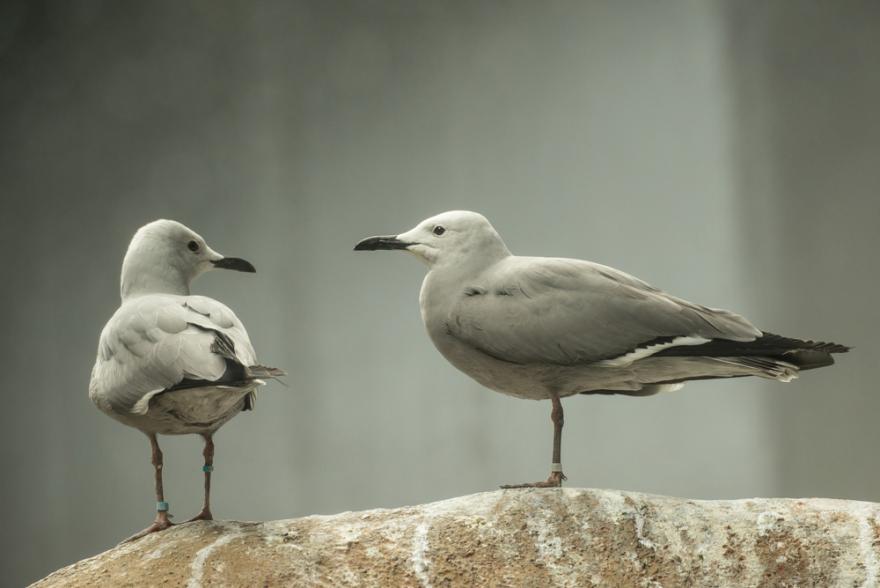 Grey gulls live on sandy beaches and mudflats on the west coast of South America from Ecuador and Peru to central Chile.

The life of a grey gull 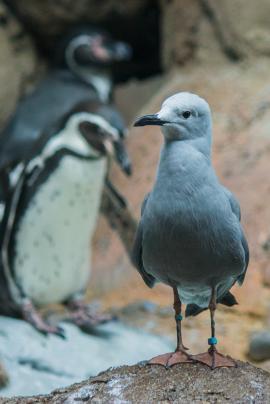 Grey gulls run back and forth between receding waves of western South American beaches, searching for small crustaceans in the sand. They also sometimes scavenge in harbors, follow fishing boats, or forage for schools of fish with other seabirds.

Grey gulls grow to a length of about 18 in and weigh 13 to 14 ounces. They communicate with a yelping "kyow" and a growled, rising "grrraaahh," along with low moans and shrill cries.

When grey gulls breed between November and January, they choose a very unusual breeding site: the Atacama Desert, 22 to 62 miles inland from the coast of northern Chile. Called the driest place on Earth, the Atacama desert is extremely arid and barren. Grey gulls choose areas covered with small rocks for cover against the sun, where the gull pair scrapes a simple nest into the sand. The female lays 1 to 3 eggs that incubate for 29 to 31 days.

Once the eggs hatch, the parents take turns making the long round trip back and forth to the sea to bring food and water to the chicks. Young grey gulls grow more slowly than any other gull species and only begin to fly at about 40 days.

The grey gull is listed as being of Least Concern by the International Union for Conservation of Nature (IUCN). They do face some challenges, however. For instance, storms associated with El Nino can cause breeding failures because they keep the birds from foraging at sea. Also, like many gulls, grey gulls lose eggs to predation. Their remote breeding habitat helps with this problem.

How you can help grey gulls

Grey gulls live in one of the world's most productive marine ecosystems, and as a result, are greatly impacted by human activity. Fishing industries deplete the penguins' prey and result in the trapping of penguins in fishing nets. You can make informed, ocean-friendly choices by using the Seafood Watch app, which ranks seafood as "best choice," "good alternative" or "avoid", based on issues affecting each species.

Grey gulls at the Oregon Zoo

The grey gulls of the Oregon Zoo live in the Penguinarium exhibit.