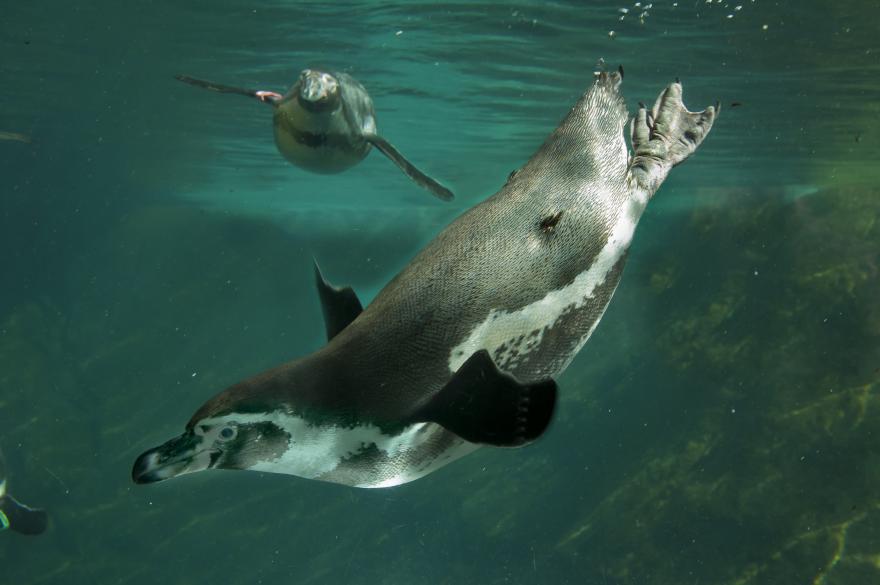 They are one of 17 penguin species in the world, all of which live in the Southern hemisphere.

The life of a Humboldt penguin

Humboldt penguins live on the "edge." They spend most of their time in the water looking for fish, returning to their burrows between foraging trips. Non-breeding penguins can spend over 150 hours in the water at a time.

Using their wings as flippers and their webbed feet to steer, Humboldts can swim up to 30 miles an hour and change directions easily. They usually dive about 100 feet but occasionally go down to 200 feet or more in their hunt for fish. As they dive, see-through second eyelids act like goggles and protect their eyes.

Humboldts are 15 to 18 inches tall, and adults weigh around 9 pounds. They have two layers of feathers—a top layer that repels wind and water and a bottom layer for warmth. They preen themselves constantly, spreading oil on their feathers from the "preen" gland. This adds insulation and reduces friction as they swim.

Humboldt penguins eat fish, squid, crabs, krill and other seafood. Eating so much seafood means drinking a lot of saltwater. A gland above each eye filters salt from their bloodstream, and they get rid of the salt through their bills—by sneezing!

Humboldts are usually monogamous and recognize each other by unique calls. To protect their eggs from predators, they burrow a nesting spot in the sand or in cliffs covered in seabird guano. The female lays 1 to 3 eggs, and both adults share incubation duties for the 6 weeks before the eggs hatch. The chicks are covered with down when they hatch. The adults feed them until the young birds have grown their waterproof outer feathers.

Young Humboldts usually stay in the nest until they fledge. They begin swimming at about 12 weeks, then go out on their own. As adults, they often come back to the colony where they were born to breed and build their own nests.

Humboldt penguins are classified as "vulnerable" by the International Union for Conservation of Nature, and in 2010 were granted protection under the U.S. Endangered Species Act. Of the world's 17 penguin species, Humboldts are among the most at risk. They depend on predictable food sources near their nesting sites, and are threatened by overfishing of their prey species.

The seabird guano that Humboldts prefer to nest in is highly valued by humans as fertilizer. Its commercial removal disrupts their breeding.

How you can help Humboldt penguins

You can help Humboldts in the wild by choosing sustainably harvested fish the next time you eat fish. The Seafood Watch app, available at www.seafoodwatch.org, will help you find and choose sustainable seafood. This action helps keep the fish penguins rely on from becoming depleted. Learn more.

Humboldt penguins at the Oregon Zoo

The Oregon Zoo has one of the largest collections of Humboldts in the United States. Mochica, Crash, and Bonita are three of the many Humboldts in the zoo's Penguinarium exhibit. The bulk of the penguins' diet is capelin, along with smelt or herring.