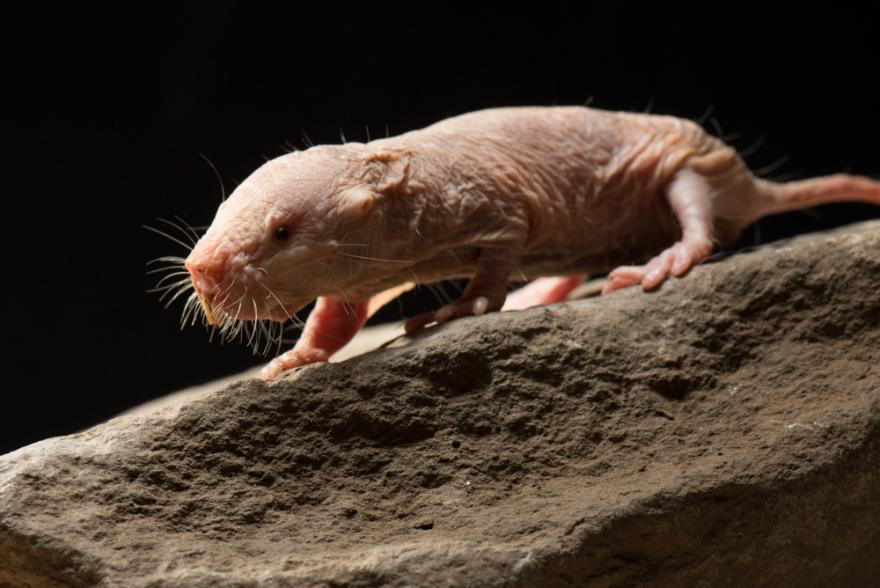 Naked mole rats live underground in the dry, arid regions of Ethiopia, Somalia and Kenya. These unique animals are rodents, but they are more closely related to porcupines and guinea pigs than they are to either moles or rats.

The life of a naked mole rat

Most naked mole rats are 4 to 6 inches long, and weigh 1 to 3 ounces. The dominant female in the mole rat colony is larger and heavier.

Naked mole rats rarely use their eyes, but they have excellent hearing and touch. While they look "naked," they actually have fine, touch-sensitive hairs all over their bodies, which help them navigate by feel in the dark. Their lips close behind their big, protruding teeth. This keeps soil from filling their mouths as they dig. They move backwards as easily as they move forward.

Naked mole rats eat underground roots and tubers. They live in colonies averaging 70-80 members, with some colonies home to as many as 300 animals. Using only their teeth to dig, they carve out a network of underground tunnels 1 ½ inches in diameter. Tunnel systems can be miles long and cover the equivalent of several football fields.

The tunnel system has a nesting chamber, where the colony piles together to rest or sleep, and where the babies are born. It also has a toilet chamber, built at the dead-end of one of the tunnels. The tunnel system often has no access to the surface, so the level of oxygen can get very low. Naked mole rats manage this problem by having a very low metabolism. They need less than half the oxygen other rodents do. Their hemoglobin—the red part of the blood—is remarkably efficient in carrying oxygen through their bloodstream. They also use less oxygen than other mammals by responding behaviorally to the temperature of the air around them, like cold-blooded animals. When it's cold, they huddle together; when it's hot, they spread out.

Each member of the naked mole rat colony has a role to play. There is one breeding female called the "queen." One to 3 males breed with her. "Housekeepers" find food, dig new tunnels, and repair existing ones. "Soldiers" protect the queen and the colony against snakes and other predators. They communicate with each other using several distinct chirping sounds.

The queen is the only one in the colony who breeds. She has up to 4 litters in a year, giving birth each time to a litter of 5 to 28 pups. She can regularly give birth to 50 or more pups a year. When she dies, several females fight to become the next queen.

Naked mole-rats are the longest living rodent, living many times longer than other rodents. They have been known to live as long as 30 years! Biologists have found at least two reasons for this. First, naked mole rats have an especially high amount of the protein that gets rid of damaged proteins in the cells. This keeps their cells healthy longer. They also have a "super sugar" molecule that prevents their cells from overcrowding and forming malignant tumors.

Naked mole rats are likely the only mammals with these molecular adaptations. Scientists believe that learning more about naked mole rats may give hope to humans who have cancer or neurological diseases like Alzheimer's or Parkinson's disease.

Naked mole rats are listed as a Species of Least Concern by the International Union for Conservation of Nature. So far they're living in areas without much farming or development, but they do eat crops like cassava and sweet potatoes. If agriculture expands into their range, they could become targeted as pests.

How you can help naked mole rats

Naked mole rats are doing well now, but you can help all animals by doing simple things, like lowering your thermostat by 2 degrees, opting out of junk mail and using the Seafood Watch app while shopping. Find more ways to help wildlife.