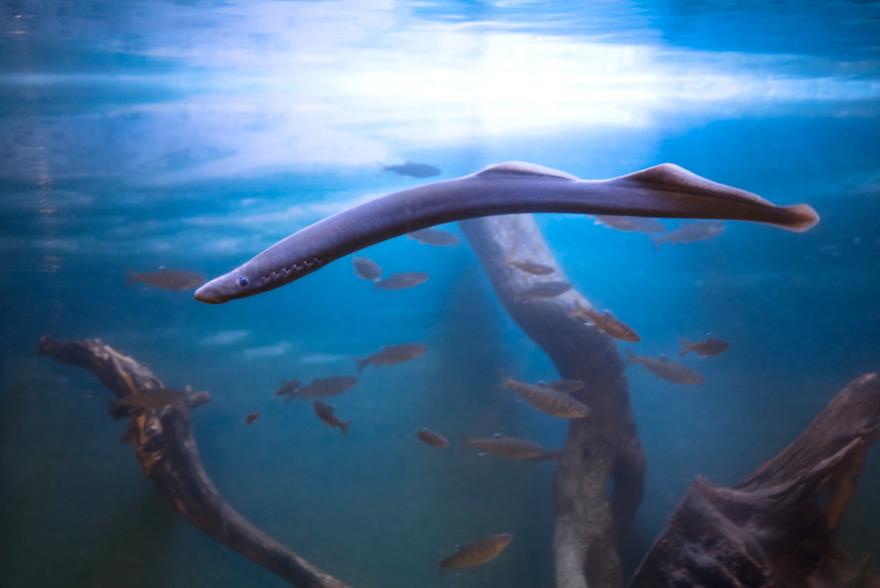 Pacific Lamprey begin their lives in freshwater streams around the Pacific Rim—from Japan north to Russia and from Alaska and the Pacific Northwest to California and Baja, Mexico. Lamprey are among the oldest fish in the world, first appearing in the fossil record 450 million years ago! They haven't changed much since that time.

The life of a Pacific lamprey

Pacific Lamprey belong to a family of eel-like fish. They're anadromous—they migrate from fresh water to the ocean and back, as salmon do. But they don't have scales, and instead of bones, they have cartilage.

Pacific Lamprey begin life about the size of a small bead and grow into adult between 3 and 7 years later on their way to the ocean. Adults have two blue eyes and a third "eye"—a light spot on the top of their head—to sense light and dark, and they smell using a nasal pore on the tops of their heads. They breathe using 7 paired gill slits. They swim like eels, using two fins at the top of their bodies and one fin near their tails.

The most impressive feature of a Pacific Lamprey is its large, jawless sucking mouth, which comes complete with several teeth. It uses this suction-cup style mouth to attach itself to rocks in between bursts of swimming. During its years in the ocean, it uses its mouth to attach to ocean fish and marine mammals and suck blood and fluids as nourishment. The process doesn't hurt the host fish permanently.

The life cycle of Pacific Lamprey can take up to 11 years to complete. They spend 3-7 years in freshwater streams, filter feeding on algae, plant material and poop from insects and fish. They act as the "clean-up crew," cleaning the mud and sand on the bottom of the stream as they eat. They then move toward the ocean, growing slowly into their adult form. They stay in the ocean for 2-3 years, then return to fresh water, where they hunker down for a year or more before finishing the migration to the place where they choose to spawn.

Females lay 100,000-300,000 eggs in a nest made of gravel, and males fertilize the eggs. After they spawn, they die and decompose, providing nutrients and energy to the stream. 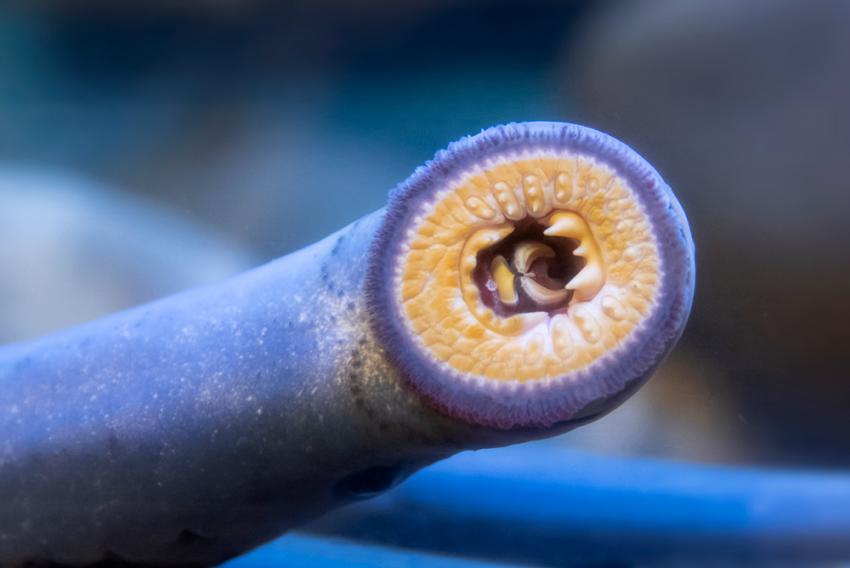 Pacific Lamprey have survived 3 ice ages and 5 mass extinctions, but in the past 70 years their numbers have been dropping. They're designated as a Species of Concern by US Fish & Wildlife Service and by Oregon's and Washington's departments of Fish & Wildlife.

They're losing access to clean water and habitat and blocked by dams and other barriers. Also, because of changes in the ocean ecosystem from climate change, more predators are eating them and it's harder for them to find the fish they get nourishment from.

The good news is that Native American tribes and Federal, State and local agencies and other organizations are coming together to help restore the Pacific Lamprey. They're installing passage structures so lamprey can move more easily. In some cases, they're removing dams or altering them to ease passage. They're restoring damaged streams to help lamprey spawn and rear young. They're moving lamprey to areas they used to live – above the dams along the Columbia. Once there, lamprey make the ecosystem healthy again, and rebuild their own habitat.

Here are some of the organizations that are working to conserve lamprey:

How you can help Pacific lamprey

You can help Pacific Lamprey by joining in on a cleanup day on your local stream. Visit the Nature Exploration Center at the zoo or check with your local watershed council to find opportunities. Spreading the word to your friends and neighbors about important these fish are to West Coast rivers, streams and tribal communities really helps, too.

Pacific lamprey at the Oregon Zoo

The Pacific Lamprey in the zoo's tank comes from the Tribal Pacific Lamprey Restoration program. As part of this program, the tribal team collects lamprey that are returning to fresh water below the three lowest dams on the Columbia River, with the help of the Army Corps of Engineers.

The team puts the lamprey in holding tanks for a year or two, until they're ready to spawn. They will be loaning the zoo some of these fish for the lamprey exhibit.

When they're ready to spawn, the tribal team will transport these and many others to their original range on tributaries of the upper Columbia River and the Snake River. Then they'll bring the zoo a new set of lamprey for our visitors to watch.