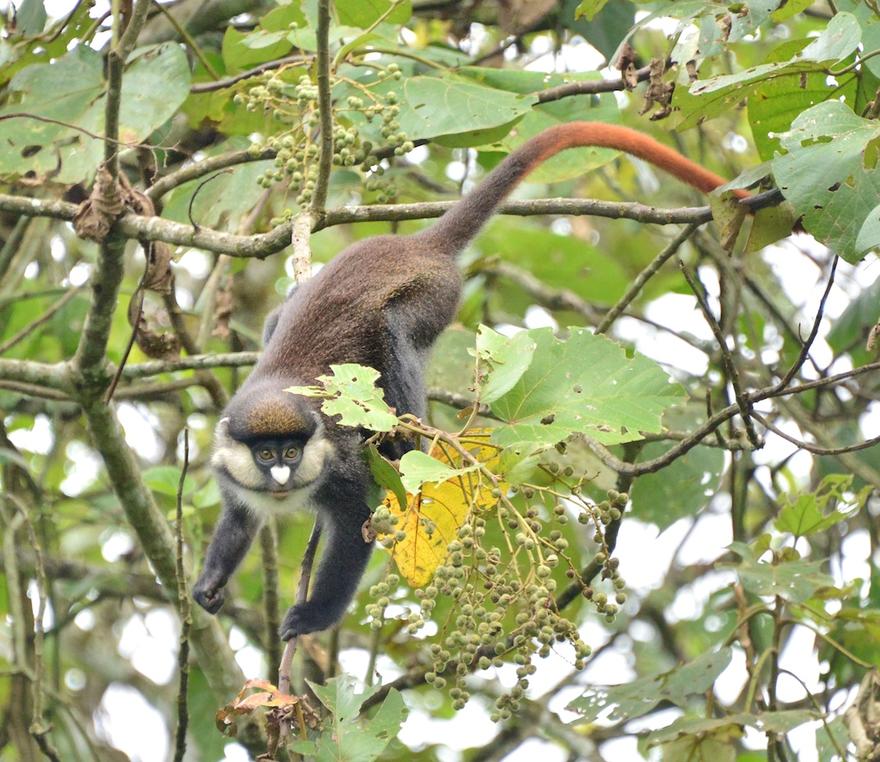 The red-tailed monkey, also known as Schmidt’s guenon or red-tailed guenon, makes its forest home in the canopies and lowlands of central Africa. Its large native range extends to the rainforests, swamps and mountains of Uganda, Rwanda, Democratic Republic of the Congo, Tanzania, Kenya and beyond.

The life of a red-tailed monkey

Named for long red tails that stretch to twice their body length, red-tailed monkeys are tree-dwelling omnivores who eat mostly fruit. Though they spend most of their time in the middle canopy of their diverse forest habitats, they will move to the ground if ripe fruit can be found there. Their love of fruit results in a wide dispersal of seeds, which is critical to the health of the ecosystems where they live.

Red-tailed monkeys have unique facial patterns, which help them recognize each other in large groups. Their large white cheeks aren’t just for show — they can store as much food in their cheek pouches as they can in their stomachs. Their bodies range from 1 to 2 feet long, and adults typically weigh between 6 and 10 pounds, with males being slightly larger than females.

These cheeky primates live in groups of 20 to 30, usually with one male and multiple females. They communicate with one another using a wide range of complex vocalizations including chirps, croaks and alarm calls, combined with facial expressions and gestures.

Red-tailed monkeys are listed as a species of Least Concern by the International Union of Conservation of Nature, due to their ability to adapt to a rapidly changing environment. Ongoing threats to these arboreal monkeys include deforestation, hunting and human encroachment.

How you can help red-tailed monkeys

When shopping for wood or paper products, look for the Forest Stewardship Council (FSC) label to help ensure that your items come from responsibly managed forests. Forests are home to 80% of the world’s terrestrial biodiversity — including red-tailed monkeys — and they help to stabilize the earth’s climate. FSC standards help limit clear cuts, restrict the most hazardous chemicals and reduce erosion along rivers.