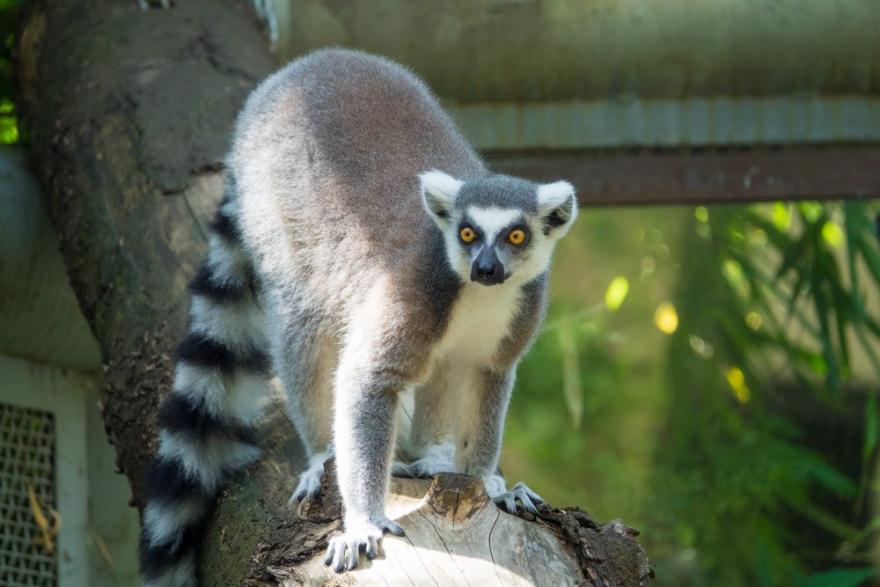 Ring-tailed lemurs live in the dry forests of southwestern Madagascar. Unlike most lemurs, they spend about half of their time on the ground.

The life of a ring-tailed lemur

Ring-tailed lemurs are hard to miss. They're named for their 2-feet-long tails, which have 13 alternating black and white rings. Like all lemurs, they're prosimians, a distinct suborder of the primate family, separate from monkeys and apes. Prosimians have many unique features, including wet noses and a keen sense of smell. 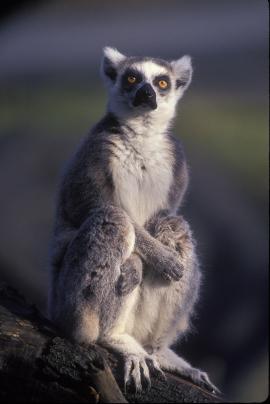 Ring-tailed lemurs weigh about 6 pounds. Their fur isn't as thick as the fur of ruffed lemurs. To warm up before their daily search for food, they gather in a "mob," stretch out belly up, and bask together in the sun.

Because of the dry habitat they live in, ring-tailed lemurs can't afford to be picky eaters. They eat leaves, flowers, fruit and insects. They'll also eat caterpillars, birds, chameleons, and spider webs. They sometimes have to range a long way to find food.

Ring-tailed lemurs are definitely social animals! Their troops are larger than any other lemur species, with up to 30 individuals Top-ranking females lead the troop and direct the others where to go.

Ring-tailed lemurs raise their tails like flags to help keep the group together as they travel. They "talk" constantly, using at least 28 different calls. Like all lemurs, they also communicate by smell, using the scent glands on their wrists and chests.

Male ring-tailed lemurs in the troop fight with each over access to females. In "jump fights," they leap into the air and slash at each other with their sharp canine teeth. In "stink fights," they each put smell on their tails and wave them over their heads and glare at each other. Eventually one gives up and runs away.

Ring-tailed females usually give birth to one cub after a gestation of 4-5 months. If there's enough food to go around, she might give birth to twins. At first the cub clings to its mother's belly, then it rides on her back. It starts solid food after about a week, and stays with its mother for 5 or 6 weeks. The troop's females help raise all the cubs.

Ring-tailed lemurs live between 16 and 25 years.

Ring-tailed lemurs are listed as endangered by the International Union for Conservation of Nature (IUCN). They're hard to count, as they scatter over large areas of forest, but they've lost over 50% of their population in the last 30 years. Their biggest threat is deforestation. Fortunately, they are found in several protected areas in Southern Madagascar.

How you can help black-and-white ruffed lemurs

You can help black-and-white ruffed lemurs by looking for the FSC (Forest Stewardship Council) label on furniture and paper to guarantee that your wood product is friendly to forests.

Oregon Zoo participates in Species Survival Plans (SSP) for our lemurs. An SSP is a "matchmaking" tool designed to manage the breeding of threatened species to keep their populations healthy and genetically diverse.

Ring-tailed lemurs at the Oregon Zoo

Our three ring-tailed lemurs, Aislinn, Gizmo and Holy, are spending the summer in the zoo's Predators of the Serengeti habitat.