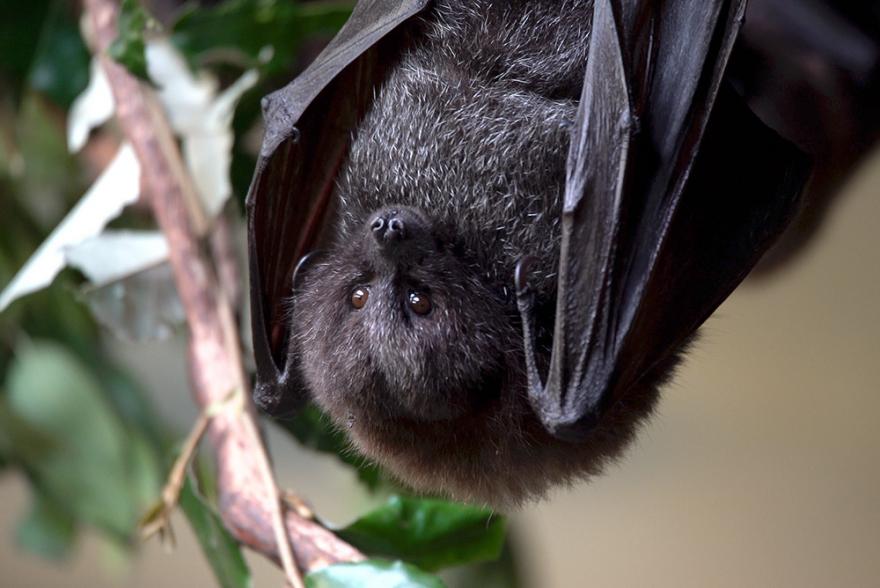 Rodrigues flying foxes are bats found only on Rodrigues, a tiny island 900 miles east of Madagascar. They live in dense rainforests with large, mature trees. As Rodrigues rainforests have been cut, their range has shrunk to a small wooded valley.

The life of a Rodrigues flying fox

Rodrigues flying foxes are actually fruit bats. They're called "flying foxes" because their erect ears and long muzzles make them look like small foxes. A Rodrigues' body is small at 6 to 8 inches long, but their wings spread up to 35 inches. Their wings have two thin layers that stretch over 4 thin, lightweight finger bones. They use the hooked claws on their thumbs for climbing.

How to help bats

Like most fruit bats, Rodrigues bats do not use echolocation. Instead, they use their excellent eyesight and sense of smell to find their food. They're active at dawn and dusk, when they land on fruit trees to feed on mangos, figs, breadfruit and tamarind pods. They crush the food in their mouths, swallow the juice, and spit out the seeds and pulp as a pellet. This helps the rainforest to regenerate. After feeding, they rest and digest their food for several hours, then return to roost in large rainforest trees.

Rodrigues bats live in groups. "Harem" groups are made up of females, pre-adults, and one adult male that defends the group from other males. Single males live in separated from the harem groups. They're very vocal: "You'll often see a young Rodrigues screaming into another bat's face, and the other one typically just takes it," says keeper Laura Weiner.

Males attract females using sounds and flight displays, and they defend their territory with scent markings. Usually only one offspring is born after 5 months of gestation. It weighs 1 to 1 ½ ounces and is born fully furred, with its eyes open. It is equipped at birth with fully developed claws, which it uses to cling to its mother's abdomen. Pups stay with their mothers for at least a year.

In the wild, Rodrigues flying foxes live between 9 and 17 years. They can live longer in captivity.

The Rodrigues flying fox is listed as Critically Endangered by the International Union for Conservation of Nature. They live in only one place in the world, and that place suffers from deforestation and frequent hurricanes.

In the 1970s, the Rodrigues population dropped to less than 100. A breeding program was started in England, and other zoos joined the effort. Today, the population is estimated to be over 20,000. The Oregon Zoo began housing Rodrigues bats in 1994 and has raised more than 50 pups.

The zoo's Rodrigues flying foxes live in the Africa Rainforest. Besides their regular meals, mostly fruits and vegetables, they love browse and tearing apart potted plants.