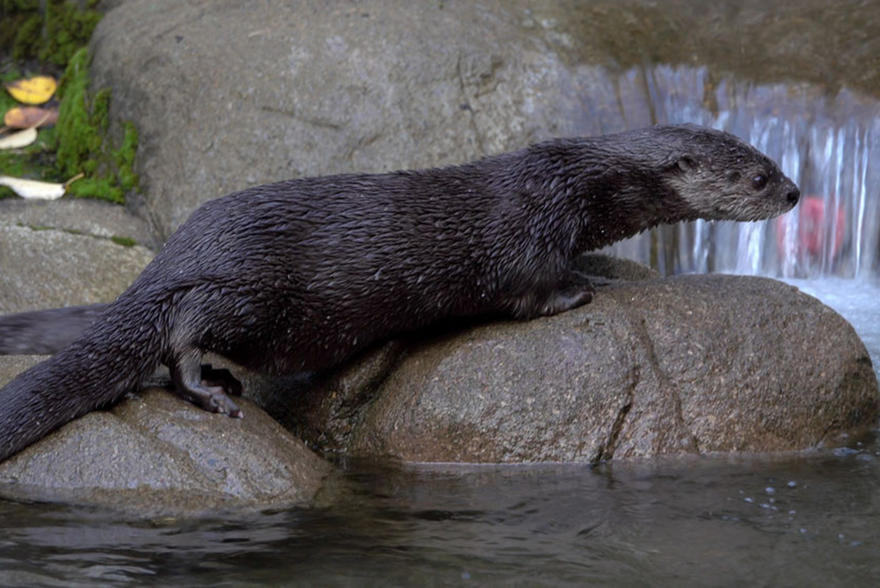 Spotted-necked otters are found in the clear, fresh waters of central Africa, especially in Lake Victoria and Zambia. They are well adapted to their aquatic lifestyle, with eyes that can adjust for being in or out of water, fully webbed paws and thermo-insulating fur.

The life of a spotted-necked otter

The Latin name Hydrictis maculicollis breaks down to water (hydro) spotted (macula) neck (collis). The uniquely patterned spots on their chests are dappled with cream-colored or white patches, contrasting their brown to red fur. The average length of a spotted-necked otter is about 2.5 feet, and they typically weigh between 7-13 pounds, with the males being slightly larger. They have long, flattened tails and are highly flexible, easily able to touch their tails with their noses. They can live alone or in large social groups.

When spotted-necked otters are not in their freshwater habitats, they can be found along the water's edge nestled in rocks and high grasses. Their dense fur traps air for insulation—on average, river otters have about 160,000 hairs per square inch. The irises of their distinctive eyes can change shape to help them see underwater and on land. They also tend to be quite vocal. While high whistles and rapid chatters are most common, they make around 20 distinct sounds.

Spotted-necked otters' claws, webbed feet and teeth all make it easier to catch, hold onto and eat their fish prey. They will also eat crabs, mollusks, aquatic insects and frogs, but they prefer fish, allowing them to coexist with clawless otter species that eat primarily crabs.

Breeding generally takes place in June and July. After two months of gestation, females give birth in their burrows to litters of one to three pups. The young are born blind and stay with their mother for about a year, learning to swim around 8 weeks and weaning after 12-18 weeks.

In the wild, spotted-necked otters live to about eight years old, but in human care they can live to be 14.

Spotted-neck otters are listed as near-threatened on the IUCN Red list. Their numbers are in decline primarily due to habitat loss and destruction, especially from unsustainable agricultural land expansion, pollution and invasive species. Overfishing and poaching are additional threats to the spotted-neck otter population.

Spotted-necked otters at the Oregon Zoo

The Oregon Zoo's spotted-necked otters live in the Africa Rainforest.