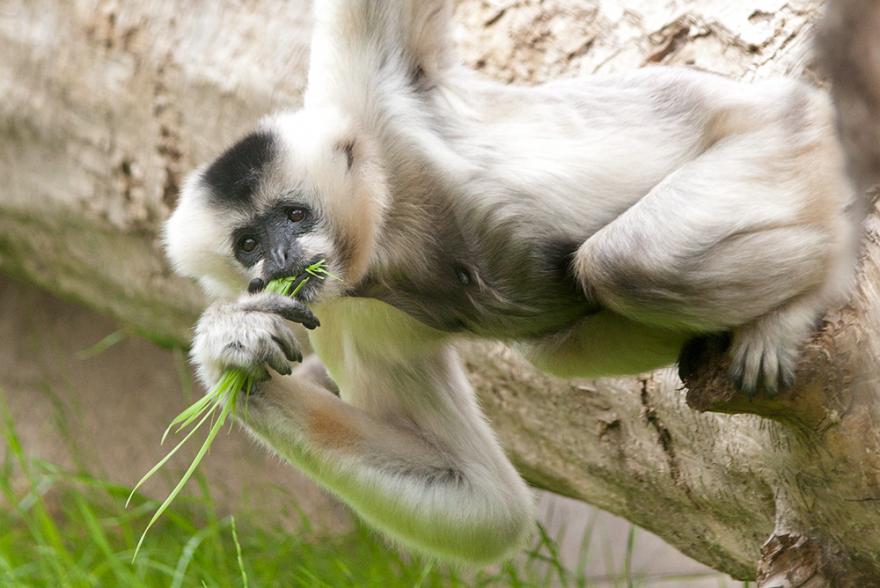 White-cheeked gibbons live in the rainforests of Laos, southern China and Vietnam. They live and feed in the trees, and almost never come down to the ground.

Life of a white-cheeked gibbon

White-cheeked gibbons are built for life in the trees. They're 18 to 25 inches tall and weigh 15 to 20 pounds. Their arms and legs are very long, and they have short thumbs and long fingers. Using this combination, they swing hand-over-hand through the forest, covering up to 10 feet per swing. 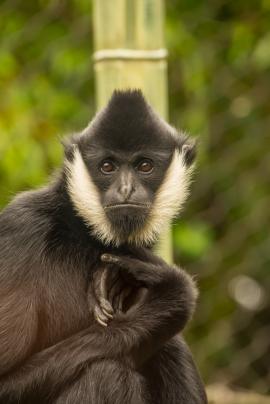 The age and sex of a white-cheeked gibbon is obvious at a glance. Infants are born white or light tan-colored. Their color changes as they grow, and by age two their coats are black with white cheek patches. When they reach adulthood, the males stay black and the females turn back to being white or tan-colored.

White-cheeked gibbons are mostly fruit-eaters, but they like leaves and insects, too. They especially like the pulp of fruit. The fruit seeds they don't digest end up on the forest floor and help re-seed the forest. White-cheeked gibbons live in family groups with a breeding pair and sometimes a juvenile offspring and an infant. Breeding pairs mate for life. They vocalize with each other in the run up to breeding. Singing together strengthens their bond and advertises their territory to other gibbon groups. They communicate in other ways, too. They spend a lot of time playing together and grooming each other. Like many primates, they open their mouths wide and show their teeth to signal aggression.

White-cheeked gibbon females give birth to a single offspring every two or three years. Gestation is about seven months. The infant clings to its mother from birth, and the male and the older juveniles help take care of the it. Youngsters are weaned early in their second year. They are physically independent at about three years old and mature at about six. They usually leave the family group at about eight, but sometimes they spend up to ten years in their family groups.

White-cheeked gibbons live 25 to 28 years in the wild.

White-cheeked gibbons are listed as critically endangered by the International Union for Conservation of Nature. Their numbers have declined by at least 80% over the past 50 years because of poaching and habitat loss from illegal logging and agriculture.

How you can help white-cheeked gibbons

You can help white-cheeked gibbons by looking for the FSC (Forest Stewardship Council) label on furniture and paper to guarantee that your wood product is "friendly" to forests. Learn more.

White-cheeked gibbons at the Oregon Zoo

The zoo's white-cheeked gibbons live in the Red Ape Reserve exhibit, which they share with the orangutans. Both primate species are native to the forests of Southeast Asia, and both spend most of their time in the canopy. Here at the zoo the gibbons eat a variety of fruits and vegetables along with primate biscuits for extra vitamins and minerals.