First-time mom Peggy and her babies are doing well 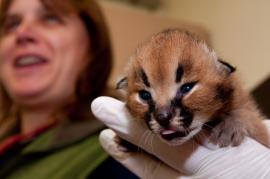 Oregon Zoo caracal Peggy gave birth to three healthy kittens, two females and one male, on June 8. According to keepers, the first-time mother and her babies are doing well, with all three kittens nursing regularly and starting to move around their behind-the-scenes nesting box.

"We are very proud of Peggy," said senior Africa keeper Asaba Mukobi. "It's really amazing to see her do everything she possibly can to care for her kittens. She's very protective, makes sure everyone is nursing, and sets boundaries for the kittens now that they're moving around."

For two days after the birth, animal care staff monitored Peggy and the kittens around the clock via remote camera. Keepers had volunteered for four-hour night shifts as part of a birth plan that mapped out keeper care for the final two weeks of Peggy's pregnancy, the birth itself and the kittens' first few days.

"Keeper care before and after the birth has been amazing," said Mukobi. "From setting up Peggy's nesting box to sleeping on cots at the zoo between their night shifts, our staff was dedicated to ensuring Peggy's and the kittens' health. Thankfully, Peggy didn't need much help from us. She is doing a great job."

Keepers and volunteers continue to monitor the caracals throughout the day, and their nighttime activity is recorded by camera and reviewed in the morning. 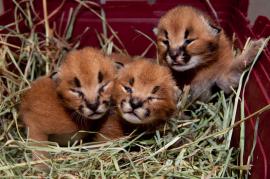 While Peggy and the kittens are spending all of their time in a behind-the-scenes area, the kittens' father, Cricket, is still on exhibit. Cricket was born at the Lory Park Zoo and Owl Sanctuary in South Africa, and moved to the Oregon Zoo in winter 2011. Peggy came to the zoo in 2009 from a conservation center in Mena, Ark.

The Association of Zoos and Aquariums, which coordinates nationwide breeding programs for many of the species housed by zoos, recommended Cricket and Peggy as a breeding pair because the cats are from the same subspecies.

The zoo's caracal habitat, which was built with the support of Portland General Electric, is part of the zoo's Predators of the Serengeti exhibit. The caracals have access to a heated den and a spacious landscape dotted with trees, shrubs, heated rocks and grassy knolls, all of which are enriching for the feline residents.

Caracals live in the woodlands and savannas of North Africa, Southwest Asia and the Arabian Peninsula. While caracals are listed in the category of "least concern" by the International Union for Conservation of Nature, hunting and habitat loss pose risks to wild populations. The caracal is listed in Appendix II of the Convention on International Trade in Endangered Species of Wild Fauna and Flora. CITES is an international treaty controlling the trade of threatened and endangered plants and animals.