Oregon Zoo cougar Palus is all grown up, moving out of parents’ home 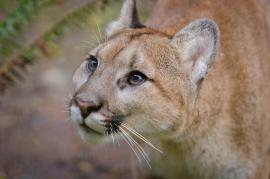 Last fall, Oregon Zoo cougar Palus was a fuzzy little cub with brown spots, blue eyes, and paws so big she often tripped over them. Now she is an amber-eyed adult mountain lion with a sleek, tan coat, and it’s time for her to move to a new home.

Zoo visitors can say goodbye to the popular cat at 10:30 a.m. on Thursday, Jan. 12, when Palus will receive a special “going away” enrichment treat. They can also see her all weekend long at the zoo’s Cougar Crossing exhibit before she leaves for the Caldwell Zoo in Texas on Jan. 17.

“Mountain lions don’t live in family groups or prides as African lions do, and males don’t live in the same space as their cubs,” said Michelle Schireman, zoo cougar keeper. “Since Palus’ birth, we’ve alternated which cougars went on exhibit so she and her father weren’t out at the same time. Now that Palus no longer needs her mother, she’ll move to Texas and her parents will have regular access to the exhibit again.”

Palus was born at the Oregon Zoo on Sept. 19, 2010, and visitors got their first peek at the roly-poly cub that November. Keepers named her after the Palus tribe of Washington state, now part of the Confederated Tribes of the Colville Reservation. She currently weighs about 88 pounds.

“Palus has been so much fun for all of us to observe over the months,” Schireman said. “She has provided endless hours of activity for her mother and inspiration for zoo visitors. We will miss hearing her little chirps.”

While it is hard for Oregon Zoo staff to see Palus go, they are happy that she has such a bright future ahead of her. Schireman said keepers at the Caldwell Zoo will be sending regular updates on the cougar’s progress there. 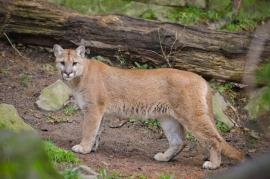 Schireman coordinates the Association of Zoos and Aquariums’ Species Survival Plan for cougars, so the Caldwell Zoo gave her a call when they decided to find an exhibit mate for their young male cougar – just the kind of living situation Schireman hoped to find for Palus. The Caldwell Zoo’s cougar, Monte, is neutered, so he and Palus will not be a breeding pair.

“Monte is an orphan from Oregon that I placed in 2009, so it’s fun that Palus is joining a cougar from her neck of the woods,” Schireman said. “I’m so pleased that Palus is going to a great home where she’ll have another young cougar to play with."

Monte’s keepers have told Schireman that he enjoys splashing around in water, which is also one of Palus’ favorite activities.

“They should have a lot of fun with the water feature in the Caldwell Zoo’s cougar exhibit,” Schireman added.

Like all cougars in accredited North American zoos, the location and reproductive status of Palus, Paiute, and Palus’ mother, Chinook, are managed by the AZA’s Species Survival Plan. For many years, the plan did not recommend breeding cougars in captivity, but that policy was recently amended because of zoos’ increased capacity to house the cats. Palus was the first cub in the country to be born under the new policy.

About half the cougars currently living in U.S. zoos are orphans placed by Schireman. In September, she received a Certificate of Merit in Conservation award from the National Association of Zoo Keepers for her “outstanding work developing an orphaned animal placement program that gives assistance to state wildlife agencies and zoological institutions in placing orphaned pumas.”

“I’m usually the first person fish and wildlife departments call when orphaned cubs are found in the wild,” Schireman said. “Young cougars can’t survive without their mothers, so I work with accredited zoos to find them new homes.”

Cougars – also known as mountain lions, pumas and (in Florida) panthers – live mostly in the western United States and Canada. They weigh from 75 to 150 pounds and have a carnivorous diet both in the wild and at the zoo. Females are either pregnant or raising cubs for the majority of their lives. After three months of gestation, two to three cubs are usually born in a litter and live with their mother for up to two years.