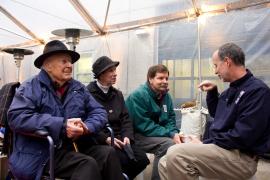 Dr. Matthew Maberry, best known as the Oregon Zoo veterinarian who delivered Packy, died Thursday night at the age of 94.

"We are deeply saddened," said Mike Keele, Oregon Zoo director of elephant habitats, who had known Maberry since the early 1970s. "Dr. Maberry dedicated his life to the health and well-being of animals. Packy's birth is only the most famous example of his commitment animal welfare."

Maberry came to the Oregon Zoo, which was then known as the Portland Zoological Gardens, in 1958, a year before it moved to its current location. He was part of a team working to design new facilities that would provide elephants with much more freedom than was common in zoos at the time. These facilities, built in 1960, allowed for normal social interactions and natural breeding among the elephants, which led to a string of successful pregnancies and births –– beginning with Packy on April 14, 1962.

Packy's birth earned international attention. At the time, only nine other elephants had been born in North America, and none since 1918. Pioneering journalist Shana Alexander covered the occasion with an 11-page feature in Life magazine describing the "nativity of Packy." That year, for the first time, the zoo welcomed more than a million visitors. It wouldn't do so again until 1989.

Maberry and his wife, Patricia, later chronicled the event in a book, "Packy and Me," released last year.

Packy's birth kicked off a baby boom among Oregon Zoo elephants. Not half a year later, Rosy, the zoo's original elephant, gave birth to Me-Tu.

"Dr. Maberry's work helped provide the foundation on which we've built today's elephant-care programs," Keele said. "During these first pregnancies, little was known about fetal development, neonatal care, maternal behavior and a host of other details associated with successful elephant pregnancies and births. Dr. Maberry assembled a team to monitor a pregnant elephant's health and tried some fetal-monitoring approaches that had not been attempted before. He and his team were able to modify or create medical equipment to monitor the heartbeat of the fetus, thereby establishing a way to confirm a pregnant elephant. This was significant because most elephants don't show overt physical signs of pregnancy."

Their work paid off. By the time Keele arrived in 1971, 10 Asian elephants had been born at the zoo. No other elephants, Asian or African, had been born anywhere else in the U.S. during this time.

Keele, who went on to become a chief architect of the Association of Zoos and Aquariums' Species Survival Plan for elephants, also remembers Maberry as a patient teacher, generous with his time and experience.

"I first met Dr. Maberry in 1971, when I began my career at the zoo," Keele said. "During my first few years here, I served under his supervision as a keeper providing care for animals held in the hospital and quarantine areas. I was 18 when I started and had very little animal-care experience. Dr. Maberry was one from whom I learned much."

And, according to Keele, Maberry continued to be of service to the zoo right up until his death.

"The time we worked together at the zoo was only about three years," Keele said. "I didn't get the opportunity to work with the zoo's elephants until 1975, after Dr. Maberry had left. But more recently, we reconnected with Dr. Maberry and he made several important visits, notably around the time Rose-Tu was pregnant with Samudra. He was always generous with his time, and we benefited from his knowledge and experience with breeding elephants."

Maberry's most recent visit to the zoo was Jan. 19 for the grand opening of a new veterinary medical center. Maberry had helped open the zoo's old vet facilities in 1966.

"I'm so glad he got to tour the new vet center," Keele said. "We were hoping he would be here to help celebrate Packy's 50th birthday in April. We will certainly be thinking of him then."

After earning his veterinary degree from Washington State University in 1947, Maberry spent five years working in Oregon and Washington mixed-animal clinics, then served as veterinarian for the U.S. Public Health Service in Atlanta, where he focused on diseases transmissible from animals to humans, such as rabies.

In 1954, Maberry moved to Portland to launch the Tetra Chemical company, which designed and manufactured specialty products for use in human dentistry. During this time, he also was owner of Portland's Broadway Animal Clinic.

Maberry left the zoo in 1973, and the following year formed Wildlife Enterprises. Until very recently, he still ran a limited practice, even making occasional house calls to elderly people with animals in need of care.

In 2008, Maberry received the Oregon Veterinary Medical Association's Award of Excellence. "Oregon veterinarians owe a great deal to veterinarians like Dr. Maberry, who took up the challenge of blazing a new trail in the field of zoo medicine," noted Dr. Dick Werner in nominating Maberry. "But his outreach wasn't only to those in veterinary medicine and zoo medicine. While with the Oregon Zoo, Dr. Maberry established a continuing education program, consisting of classes for schoolteachers in the Portland metro area.... The classes were filled to capacity, and were successful in helping the teachers understand, teach and communicate to their students about the respect, care and assistance animals need."