Predictions can be a tricky business, and this year’s Super Bowl picks by Oregon Zoo orangutans Inji and Kutai may be a perfect example. In a tradition dating back to 1996, the zoo’s orangs put on T-shirts indicating their picks for winner of the big game.

With a crowd of zoo visitors looking on, and Lewis & Clarkfootball coach Chris Sulages calling the play-by-play, Kutai donned a New England T-shirt this morning, signaling a Patriots victory, while his grandmother Inji chose a New York Giants T-shirt. Or did she? 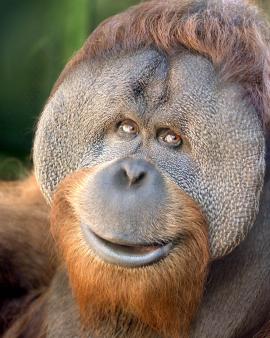 While Kutai’s choice was clearly the Patriots, there was some debate over Inji’s pick. The orang matriarch initially grabbed a Giants T-shirt, then cast it aside in favor of a Patriots shirt, which she put on part of the way – then selected yet another Giants shirt to put all the way on. Coach Sulages called it for the Patriots during his play-by-play, but was later overruled by the zoo’s senior primate keeper, Dave Thomas, who has traditionally served as head referee for the event.

Kutai has correctly predicted the outcome in five of the past seven Super Bowls, including the Giants’ upset victory over the heavily favored Patriots in 2008 – a fact that has sparked a lot of discussion recently as the two teams gear up for a rematch.

After the orangs made their picks, visitors stopped by a table staffed by the zoo’s conservation team to learn about two types of primate food: humans’ Super Bowl snacks and orangutans’ diet in the wild. Visitors learned what snacks can help protect wild orangs, and how traveling for food puts orangs in danger when they cross palm oil plantations.

Inji’s ability to predict the winner of football games was discovered by chance back in 1996. A local sportscaster had seen the orangs receive clothing items as enrichment and wondered what they might dowith Beavers and Ducks T-shirts prior to the teams’ 100th Civil War game. Inji, the most dominant of the orangs at the time, put on an Oregon shirt, and the Ducks went on to win, 49-13.

Two years later, she was given the same challenge and again picked the winner – the Beavers this time, in a 44-41 double-overtime thriller. Still somewhat skeptical, keepers put Inji to the test in that season’s Super Bowl, and she correctly chose Denver over Atlanta. Inji eventually attained a record of 6-1 in her predictions, but became less reliable once her grandson Kutai began participating.

According to Thomas, Kutai began inserting himself into the prediction process in 2005 and has shown he knows how to pick a winner: “While Inji’s record has slipped a bit, Kutai has been very accurate.

Thomas won’t speculate about whether Inji might be stepping aside to allow her grandson to shine or if he’s just taking over by force.

“Kutai likes to take all the shirts from one team, so sometimes Inji’s choice has been limited,” Thomas conceded. “However, that worked in Inji’s favor once when Kutai incorrectly hoarded the Colts T-shirts.”