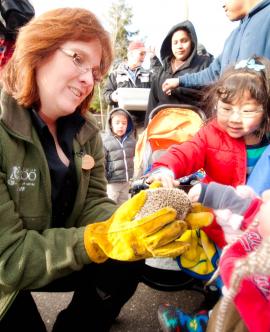 Pack those snow tires and chains away. Jabari, the Oregon Zoo’s African pygmy hedgehog, did not see his shadow this morning, meaning an early spring could be in store. Or not.

At 10 a.m., visitors gathered in the zoo entry plaza to watch the proceedings, some bearing signs with slogans like “Hedgehogs for an early spring!” and “Hey, Punxsutawney Phil! You ain't nothing but a groundhog!”

Historically, the hedgehog has been used in this centuries-old tradition to predict the onset of spring. Immigrants to North America substituted the groundhog when they found there were no hedgehogs in their new homeland.

“The groundhog is actually a latecomer to the weather prediction game,” said zoo director Kim Smith. “We’re proud to bring this tradition back to its true origins.”

Considering the track record of the zoo’s hedgehog though, tradition – and cuteness – might have to count for a lot.

“Last year, Jabari also predicted an early spring, which was not all that accurate,” Smith said. “You might not want to pack away those winter necessities just yet. But our hedgehog still has a better track record than Punxsutawney Phil.”

According to records from StormFax Weather Almanac, Phil’s predictions have been right just 39 percent of the time. Oregon Zoo hedgehogs have been marginally better with a 43 percent accuracy rate.