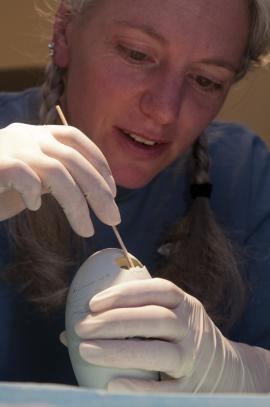 Chick, emerging from a repaired eggshell, got stuck when confused parent stopped brooding

Two days after it first tried to hatch from its egg, the Oregon Zoo's newest California condor successfully made its way into the world March 29. This second chance at life was made possible by condor keeper Kelli Walker, who stepped in when the chick's father became confused and stopped brooding the hatching egg.

"We're so glad the chick is doing well now," Walker said. "Each hatching is an important step in our work to save the endangered California condor, and it's also just nice to see the hatchling pull through."

This complicated hatching wasn't the first hurdle the egg had faced. In February, Walker had pulled the egg to test its fertility and noticed what appeared to be a small hole in the egg's shell. After treating the area with sterile water and a diluted antiseptic, Walker used a thin layer of white glue to cover it. Despite the defect, the egg did prove to be fertile, and Walker placed it in an incubator after giving parents Timocho and Willie a dummy egg to brood.

On the morning of March 27, the egg showed signs of an external pip: It was time for the chick to hatch. Walker swapped the egg back into its parents' nest room, where father Willie took over brooding duties. According to Walker, both parents had done extremely well earlier in the season with incubation and egg-sitting duties, but the hatching process appeared to confuse Willie.

"Caring for a chick is a learning process, and this is only Timocho and Willie's second egg," Walker said. "Willie just didn't seem to know what to do with a hatching egg. He kept gently rolling it around the nesting room, but it needed to be incubated during hatching – Willie was spending too much time off the egg."

Exposed to the air, the egg's membrane started to dry out, effectively trapping the chick inside. After quickly retrieving the egg, Walker coated it in a sterile lubrication and placed it in a high-humidity incubator. The warmth and moisture loosened the membrane, and early March 29, Walker was able to help the vocalizing chick restart the hatching process.

"After I pulled away part of the shell, I could see the chick vigorously moving one of its wings," Walker said. "It was a great sign."

Reassured that the chick was in good health, Walker once again placed the egg back in the nest room and waited to see how Willie would react. This time, the father did well: He stayed on the egg while it hatched, took a look at his newly emerged chick, and then scooped it out of the remaining shell. He's been brooding the chick ever since.

Keepers and veterinary staff are optimistic about the chick, but caution that the hatchling isn't out of the woods yet.

"The chick is doing well, but a lot can happen in a condor's first few days," Walker said.

This is the second Oregon Zoo condor to hatch this season, and another three are expected to hatch in the next few weeks.

The California condor is classified as a critically endangered species. In 1982, only 22 individuals remained in the wild. With the help of breeding programs like the Oregon Zoo's, condor numbers now total around 390, counting those in programs and in the wild.

More than 30 healthy chicks have hatched at the Jonsson Center since the program began in 2003. Around 20 Oregon Zoo-reared birds have gone out to field pens, with most released to the wild. Last year, three eggs laid by Oregon Zoo condors were placed in wild nests to hatch.

Accumulated lead poisoning – a problem that plagues all raptors and scavengers – is the most severe obstacle to the California condor's recovery. As the birds feed on carrion and other animal carcasses, they can unintentionally ingest lead from bullet fragments. Lead consumption causes paralysis of the digestive track and results in a slow death by starvation. Lead also causes severe neurologic problems, so the birds not only starve but suffer from impaired motor functions.

The last native condor seen in Oregon was near the town of Drain in 1904. The birds held out a little longer in California, but by 1987, the last condors were taken into captivity in an attempt to save the species. Biologists decided to place the remaining condors in a captive-breeding program. The California condor was one of the original animals included on the 1973 Endangered Species Act.