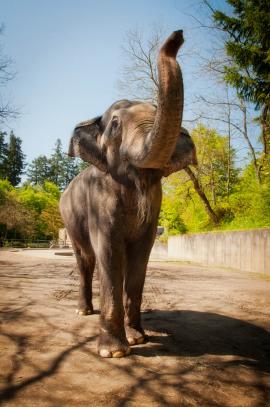 Put on your elephant ears and get ready to party! Packy the elephant is turning 50 years old April 14, and the zoo is celebrating Oregon’s most beloved elephant with a birthday bash featuring music, games and cake. The party is free with zoo admission and runs 10 a.m. - 4 p.m., Saturday, April 14.

In 1962, Packy became the first elephant to be born in North America in 44 years, and he’s held a special spot in his fans’ hearts ever since. Packy’s birth also helped scientists better understand elephants – his mother’s pregnancy established the length of elephant gestation, for example – and opened the door to a new era in elephant welfare.

“The Oregon Zoo is world-renowned for its Asian elephant program,” said Kim Smith, zoo director, “and Packy’s birth was the cornerstone on which this program was built. Packy has been inspiring people to care about elephants for half a century. It’s only fitting to celebrate the elephant who started it all.”

Packy won’t be the only one to get a birthday treat at his party. Visitors born on the same date as the elephant – April 14, 1962 – will receive free zoo admission for themselves and a guest on the day of Packy’s party. People turning 50 this year will receive 50 percent off admission for themselves and a guest, as will people born on April 14 of any year. Proof of birth date (government-issued ID) required.

At 2 p.m. on his big day, Packy will be knighted by the Royal Rosarians – joining the ranks of previously knighted luminaries such as Ed Sullivan, George Washington and Mickey Mouse – and then chow down on his enormous birthday cake. While the cake’s design changes from year to year, the way Packy eats his baked good remains the same: quickly.

Humans can enjoy cake at Packy’s party, too, courtesy of Lamb’s Wilsonville Market. Guests should be sure to grab a piece at noon when the cake is served – whether it’s for humans or elephants, cake tends to go fast on Packy’s birthday.

A full party schedule is available, along with information about Packy’s history, the zoo’s elephant herd, 50 ways to celebrate Packy’s 50th, and Packy-themed activities taking place across the city.

Vintage color footage from the time of Packy’s birth