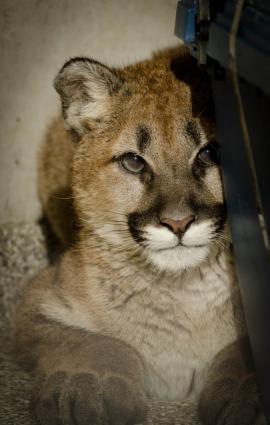 An orphaned cougar cub with a penchant for meatballs has moved to a new home after receiving medical care at the Oregon Zoo's veterinary hospital. The male cub, who was found by the Washington Department of Fish and Wildlife near Twisp, Wash. after a hunter killed his mother, stayed at the zoo from late March until mid-April. Thanks to Oregon Zoo cougar keeper Michelle Schireman, who reached out to zoos across the country, the cub has settled into a sunny new home at Florida's Palm Beach Zoo.

An exam showed some signs of frostbite on the ears and toes of the nearly 5-month-old cat, but staff say he was otherwise healthy. Schireman believes the cub was fed by human onlookers during his time in the wild. While he was underweight, an orphaned cub of his age would be severely emaciated at best without assistance from humans, being too young to have the skills or resources necessary to survive on his own. Additionally, the cub approached keepers for food – meatballs in particular. Schireman says that young cougars without positive prior human interaction would "definitely be afraid of people" and would not approach keepers voluntarily.

Cougars – also known as mountain lions, pumas and (in Florida) panthers – live mostly in the western United States and Canada. They weigh from 75 to 150 pounds and have a carnivorous diet both in the wild and at the zoo. Females are either pregnant or raising cubs for the majority of their lives. After three months of gestation, two to three cubs are usually born in a litter and live with their mother for up to two years.

Last year, Schireman received a Certificate of Merit in Conservation award from the National Association of Zoo Keepers. The award recognized her "outstanding work developing an orphaned animal placement program that gives assistance to state wildlife agencies and zoological institutions in placing orphaned pumas." She has served as puma population manager for 17 years, placing more than 70 orphaned cubs. About half of the cougars currently living in U.S. zoos are orphans placed by Schireman. Since 2009, the Oregon Zoo has housed 14 of these orphans while Schireman found them permanent homes.