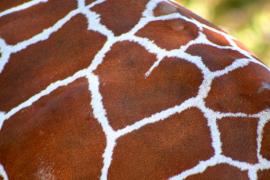 Riley, a giraffe from Utah's Hogle Zoo, comes to Portland for lengthy stay

The long-necked 8-year-old, easily identified by a distinctive heart-shaped marking on his left side, will stay in Oregon for two years while the Hogle Zoo renovates its giraffe habitat, returning when the new space is finished.

"We are glad to be able to help out another zoo while they update their facility," said Jennifer Davis, primates and Africa curator at the Oregon Zoo. "We are also excited to give our own giraffe a companion. It's a win-win situation for everyone." 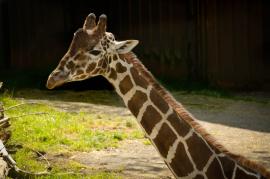 Riley made the big move to Portland in an extra-tall trailer equipped with a video camera so keepers could make sure he was safe inside. He will join Bakari, a 5-year-old male giraffe who has been at the Oregon Zoo since 2009. Bakari has been the zoo's sole giraffe since longtime zoo resident Akeem died in December.

While Riley adjusts to his new home away from home, keepers are making special arrangements to ease the transition. Bakari will stay primarily in the indoor giraffe space for now, and will slowly be introduced to his new companion in the outdoor territory. Smaller animals sharing the Africa Savanna habitat, such as the ground hornbills, have been temporarily moved out but will eventually be reintroduced.

Giraffes, the tallest mammals on earth, can grow up to 18 feet tall. Additional impressive stats include: tongues up to 21 inches long, running speeds of up to 35 miles per hour, and the ability to consume up to 75 pounds of browse (leaves and brush) each day.