Zoo Brew raises its glass to a sellout crowd

They came. They saw. They tasted.

On Friday, June 1, 2012, the Oregon Zoo Foundation hosted a sellout crowd of more than 3,100 of the region's most committed brew aficionados. The result was one of the most energizing and unique brewers' festivals Oregon has ever seen!

Women, men, friends, partners, animal lovers and zoo supporters alike descended on the zoo's concert area where a touch of gray skies could not threaten to dampen the crowd's enthusiasm.

Often-short lines greeted attendees at 40 different booths serving more than 70 artisan brews and ciders – all of whom had donated their time and products to be involved in this annual event, which raises money to support the zoo's animal welfare, conservation, education and environmental sustainability programs.

Guests who needed a reprieve from tasting didn't have to search far for other fun activities: a carnival tested skills at high-stakes games such as skee ball, two-shot basketball, ring toss and spill the milk with prizes like t-shirts and hats from participating breweries.

Women Enjoying Beer and Portland U-Brew treated attendees to a series of five free workshops that offered beer education on everything from home brewing to the science behind beer. Meanwhile, party sounds of DJ Angry Little Man and Seattle band Cool-Ade emanated from the concert's main stage where guests boogied down until the last call.

All the while, event emcee Skip from Charlie FM's afternoon show kept everyone posted on all the important happenings throughout the evening – including ways to donate to support the zoo. 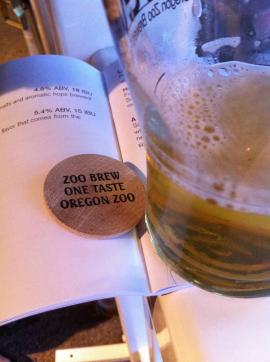 Which beer was voted the fan favorite of the evening? A tally of results reveals that the winner is...

Thanks for everything, Portland. The zoo thanks you, the Oregon Zoo Foundation thanks you, but most importantly – there are a lot of animals who thank you.

Stay tuned for an even bigger and better Zoo Brew in 2013!