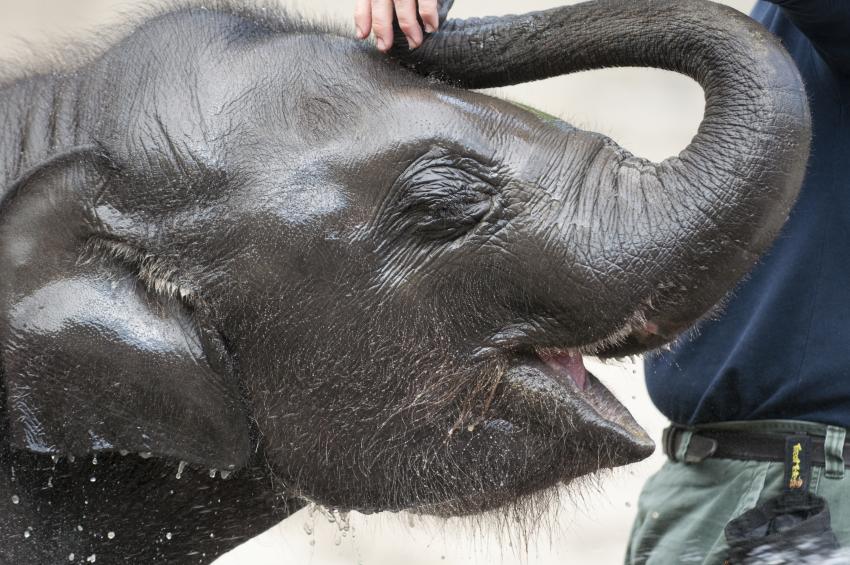 The Oregon Zoo's youngest elephant, Samudra, turns 4 years old Thursday, Aug. 23, and keepers say the popular pachyderm has done quite a bit of growing up this past year.

Like many 4-year-olds, Samudra is active and inquisitive, loves to play in water, and prefers fruit to vegetables, according to keepers. But after a few years of depending on his mother for milk and being nurtured by his "aunties," he is now nearly weaned — a necessity with Rose-Tu's second baby on the way — and he has also received some life lessons in what it means to be a bull.

In 2008, Samudra became the first elephant born at the Oregon Zoo in 14 years, when his mother Rose-Tu was born — and if all goes well, he will soon be a big brother. Rose-Tu is due to give birth to another elephant in late November or December. This week marks her 18th month of pregnancy — she has been "in a family way" since February 2011 — and the gestation period for Asian elephants is around 20 to 22 months.

His father, Tusko, has been teaching Samudra how male elephants, called bulls, interact with female elephants. Tusko has also taught the youngster to respect him as the dominant male of the family grouping by, among other things, waiting to eat until after Tusko has eaten and not facing the impressive bull directly.

Keepers hope that by learning to be a submissive male elephant in his youth, Samudra will mature more slowly and therefore remain with his mother and aunties for a longer time before separating from the herd, as males do in the wild.

In their natural habitat, male elephants are not permanent members of family herds. The majority of the time spent with the females is for courtship and breeding. The rest of the time, adult males live apart.

The Oregon Zoo currently manages three bull elephants and a female herd as four separated groups, moving them throughout the day to provide care, exercise and access to the outdoors as they socialize with each other. Next year, the zoo plans to begin work on a new elephant habitat, which will allow bull elephants to drift in and out of the herd as they would in the wild, minimizing keeper-made decisions about which elephants socialize together at any given time. In the expanded zoo habitat, all elephants will have a greater amount of choice in how and where they spend their days and nights.

The zoo's elephant habitat will extend around the eastern edge of the zoo campus, from south of the current habitat north into the former Wolf Meadow. Elephants will have access to a variety of terrain, from rolling meadow to hilly forest. Designed for elephant comfort, health and enjoyment, the new habitat will include scratching surfaces, pools for bathing and mud wallows to cool and protect skin.

By the time Samudra is an adult, keepers hope he will be able to take the social lessons taught him by Tusko and pass them on to young bull elephants in the future.

The Oregon Zoo is recognized worldwide for its successful breeding program for Asian elephants, which has now spanned five decades. More than 25 elephants have been born at the zoo, beginning with Packy in 1962. Samudra is the first third-generation elephant to be born in the United States.

The Oregon Zoo's central role in the Association of Zoos and Aquariums' Species Survival Plan for Asian elephants has earned it an international reputation for its research and commitment to helping this endangered species. Asian elephants are considered highly endangered in their range countries, threatened by habitat loss and conflict with humans. It is estimated that only around 38,000 to 51,000 remain in fragmented populations.