Bullfrogs may be responsible for one of the greatest disappearing acts in the Pacific Northwest: Wherever they go, native Oregon spotted frogs vanish. The invading titans have managed to outcompete — and gobble up — every spotted frog population they've encountered, except for one. North of Hood River is a wetland called Conboy Lake, home to a seemingly bullfrog-proof population of spotted frogs. Now, Oregon Zoo researcher Kyle Tidwell is investigating the secret to the Conboy Lake superfrogs' success. His findings may help the species avoid extinction. 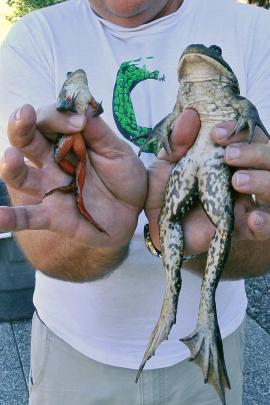 Oregon spotted frogs — also known as "spotties" — once ranged throughout the Pacific Northwest, but have since disappeared from 95 percent of their former range.

"Almost every former spotted frog habitat is now occupied by bullfrogs," Tidwell said. "We don't know if that's correlation or causation, but we do know that we're never going to get rid of bullfrogs. They are here to stay."

Bullfrogs — natives of the eastern United States, where they play an important role in wetland ecosystems — are the goliaths of the amphibian world, often weighing more than a pound. Raised commercially for their meaty legs, they've been introduced throughout North America, Mexico, Brazil, Europe, China and Japan. In each of those places, they have contributed to the decline of local amphibians.

But at Conboy Lake - a National Wildlife Refuge - Oregon spotted frogs have lived alongside bullfrogs since the 1960s.

"How did the Conboy superfrogs survive? That's the million-dollar question," Tidwell said. "We already know that Conboy spotties grow larger. By the time they are reproductively mature, they no longer fit in a bullfrog's mouth."

But understanding how Conboy Lake gave rise to a strain of superfrogs, and what other factors may contribute to their success, remains a mystery.

Every spring for the past five years, Oregon Zoo conservation staff members have assisted the Washington Department of Fish and Wildlife in scouring Conboy Lake for spotted frog egg masses, collecting 10 eggs from each cluster to rear in the relative safety of the zoo. Spotted frogs from Puget Sound's Black River — which remains free of bullfrogs — also have been reared at the zoo.

By late summer the frogs have reached their adult stage and are released into bullfrog-free habitats throughout their historic range. 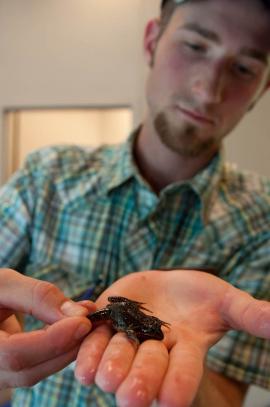 In 2008, Oregon Zoo deputy conservation director Dr. David Shepherdson and zookeepers were netting frogs in the zoo's captive-rearing ponds to record their weight and size.

"The keepers remarked that the Conboy frogs were a lot harder to catch than the Black River frogs," Shepherdson said.

A light switched on for Shepherdson and Washington Department of Fish and Wildlife Researcher Dr. Marc Hayes.

"Were the Conboy frogs really harder to catch?" Shepherdson asked. "Perhaps that explained their success at evading predators."

With Shepherdson's encouragement, Tidwell set about testing the theory, devising a sort of aquatic racetrack to measure each spotted frog's reaction time. He filled a shallow aquarium with water. Above the water, a pulley suspended a bright orange ball, that, when dropped, would stop just above the water's surface — simulating a plunging beak of a predatory bird. A high-speed camera peered down at the entire setup.

To run the time trials, Tidwell placed a frog in the tank, rolled the camera, dropped the ball, and recorded how long it took — in milliseconds — for each frog to react and dive to safety.

"The Conboy and Black River frogs were the same size, and they were reared under the exact same conditions," Tidwell said. "But in every single trial, the Conboy frogs had significantly faster response times than the Black River frogs. Moreover, testing at two time intervals showed that as the frogs grew larger, they became faster."

On average, the Conboy frogs responded only a split-second faster than the Black River frogs.

"But that split-second," Tidwell said, "may be the difference between being alive and being lunch."

The results of Tidwell's research will be published in the spring 2013 volume of the Journal of Herpetology. Watch a comparison video here:

"The study will help us determine whether captive-rearing, because it is a predator-free environment, might dilute anti-predator responses," Tidwell said. "It will also help us identify which frog populations might be the best candidates for reintroduction programs."

Tidwell's next phase of research investigates other factors that might separate the frogs from the superfrogs, such as pollution. Contaminants, such as agricultural runoff, have been known to impair anti-predator response.

"Invasive species are rapidly becoming a huge problem for the recovery of a wide range of native species," Shepherdson said. "But until we understand the details of how and when predation happens it is difficult to make management recommendations to mitigate for their impact. This work is not easy to do, but dedicated researchers like Kyle are leading the way to fill in our knowledge gaps."