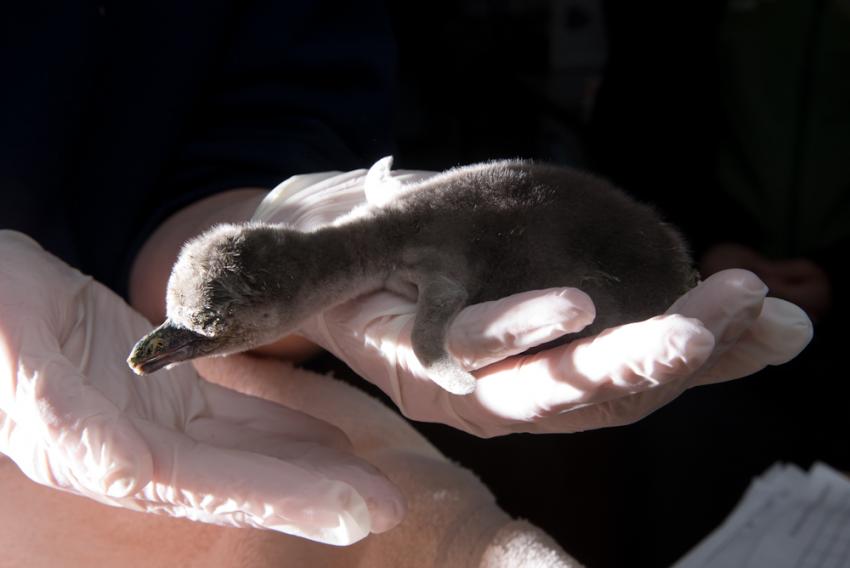 The spring baby boom continues: Five new hatchlings have joined the Oregon Zoo's 18 adult Humboldt penguins over the past month — the first penguin chicks to hatch at the zoo in four years.

During hatching season, zookeepers routinely check the progress of brooding penguin parents, briefly removing eggs from nest boxes each day to make sure they are fertile and in good condition. And this year, one of the eggs presented keepers with a rare opportunity: the chance to watch a Humboldt penguin chick as it first emerges from its shell.

"We pulled one of the eggs to check it, and it was almost done hatching," said Gwen Harris, the zoo's senior bird keeper. "Usually, we don't get to see an egg hatch — that happens inside the nest box, underneath the parents — but we were lucky enough to watch this one."

After checking the hatchling's health, keepers put it back inside its egg and returned the egg to underneath its parents.

Watch a video of the chick emerging from its shell:

Visitors can expect to see the five new chicks this summer, when the young birds fledge, emerge from their nest boxes and begin to explore their surroundings — waddling over the rocky terrain and darting through the clear water of the zoo's penguinarium. (Penguins start swimming right away, and don't need lessons the way young river otters do.)

It will be the first time in four years visitors will be able to see penguin chicks in Portland. The zoo's breeding program had been on hiatus, in part due to renovations at the zoo's penguinarium. Once the chicks emerge, they will be easy to identify: they'll be grayish-brown all over and won't develop the distinctive black-and-white markings of adult Humboldts for a couple more years.

The penguinarium reopened to the public last November, following a much-needed upgrade of its water-filtration system, one of many sustainability improvements funded by the community-supported 2008 zoo bond measure. The upgrade saves 7 million gallons of water each year.

Humboldt penguins (Spheniscus humboldti), which live along the South American coastline off of Peru and Chile, are classified as "vulnerable" by the International Union for Conservation of Nature, and in 2010 were granted protection under the U.S. Endangered Species Act. Of the world's 17 penguin species, Humboldts are the most at risk, threatened by overfishing of their prey species, entanglement in fishing nets, and breeding disruption due to commercial removal of the guano deposits where the penguins lay their eggs. Their population is estimated at 12,000 breeding pairs.

Through its Future for Wildlife program, the Oregon Zoo has long supported Peru-based conservation organization ACOREMA's work to protect the vulnerable Humboldt penguin. ACOREMA monitors penguin mortality and works closely with San Andrés fishermen to mitigate the practice of hunting penguins for food. The group also trains volunteer rangers, reaching out to 3,000 students, teachers and Pisco-area residents a year to raise awareness about penguin conservation.