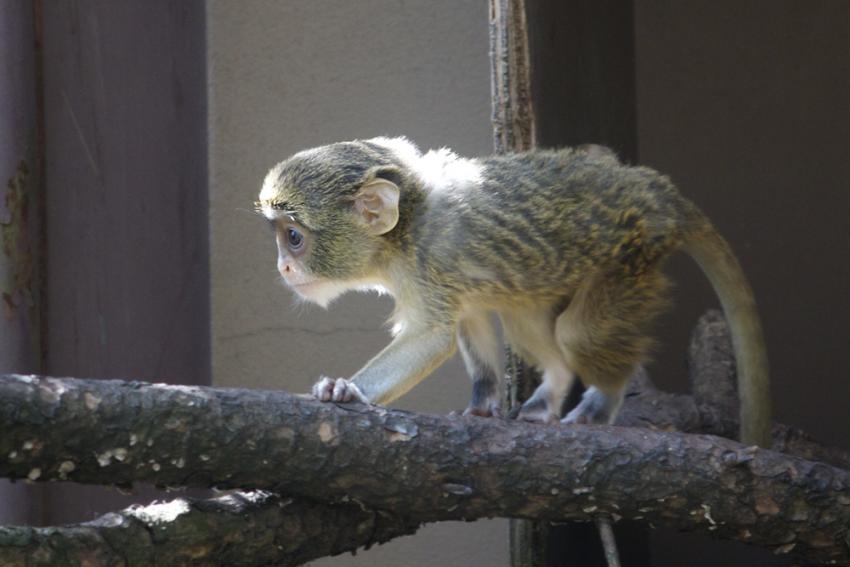 Keepers get close enough to determine gender; baby named after his father, Gus

The Oregon Zoo's new De Brazza's monkey finally has a name: Augustus. The youngster arrived — wide-eyed, blond and furry — more than a month ago, but his mom, Brooke, had kept him so close that keepers couldn't be sure of his gender until recently.

Late-night keepers first spotted Augustus around 10:30 p.m. on Feb. 24, and news of the baby spread quickly around the zoo.

"Augustus was attached to Brooke's belly 24/7 for about a month," said Asaba Mukobi, the zoo's senior primate keeper. "He might've seemed like a mama's boy at first, but he's been growing more independent lately. We've seen him venturing out on his own, scurrying up branches and exploring the habitat. Brooke has been an excellent mother. She's been very protective and is very patient with all his adventures." 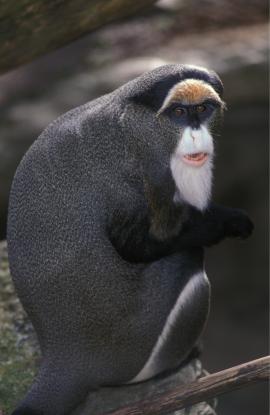 Visitors can see the pair in the "treetops" section of the zoo's Africa Savanna area, near the giraffe and naked mole rat habitats.

Keepers chose the name Augustus in honor of the monkey's father, Gus, who died last month after his chronic liver condition took a turn for the worse.

"It's been an emotional time for everyone," Mukobi said. "A lot excitement over the new baby's arrival and then a lot of sadness when Gus died. Once we knew for sure that the baby was a boy, we wanted to give him a name that honored his dad's memory."

Gus was born at the Bronx Zoo in 2000, and came to the Oregon Zoo in 2008 based on a recommendation from the Association of Zoos and Aquariums' species survival plan for De Brazza's monkeys. He was a favorite among the zoo's primate and Africa keepers, many of whom had worked with him for five years. Augustus is his only offspring.

De Brazza's monkeys inhabit the dense, swampy forests of equatorial Africa, from western Cameroon to southern Ethiopia on the continent's east coast. They spend most of their time in the treetops and are most active during the early and later parts of the day. The monkeys are primarily herbivores, foraging for fruit, buds, young leaves and flowers — but will occasionally catch insects and lizards to eat. They are territorial and live in small family groups.

The species is named for Pierre Savorgnan de Brazza, the late-19th-century explorer who founded Brazzaville, capital of the Republic of the Congo. Though not considered endangered, De Brazza's monkeys face threats from the African pet trade as well as habitat destruction and fragmentation, especially by Ethiopian coffee plantations. In Ethiopia, the species is protected from hunting and trapping.