Learning to swim isn't easy, even for a river otter.

Mo, a North American river otter born at the Oregon Zoo in late January, took his first dip last week, but not without a lot of help from mom. Tilly initiated the swimming lesson by nudging Mo to the water's edge and then plunging in with a firm grip on the scruff of her pup's neck, just as otter moms do in the wild.

"A lot of people don't realize it, but swimming doesn't come naturally to river otter pups," said keeper Becca Van Beek. "They have to be taught to swim by their moms, and so far Tilly's been an amazing teacher."

Even though Tilly is a first-time mom, she has been doing all the right things for her pup, according to keepers.

"It might look kind of scary to a casual observer," Van Beek said. "She'll grab Mo by the scruff of the neck and dunk him in the water. But that's a very natural behavior. Baby otters are extremely buoyant, so Mo has built-in water wings for his swim lessons. This is how baby otters learn to swim, and it's exactly what we've been hoping to see."

Until last week, Tilly and her baby had occupied a private, off-exhibit maternity den. River otters are very dependent on their mothers when they're born. It's usually three to five weeks before young otters open their eyes, and about five weeks before they first walk.

After first baby-proofing the exhibit, zookeepers began giving Tilly and Mo outdoor access during the mornings, and since then the otters have been making quite a splash. The best time for zoo visitors to catch them is between 9:30 a.m. and noon, though the otters don't always decide to venture out, Van Beek said.

Mo, named for the Molalla River, is the first river otter to be born at the Oregon Zoo. He weighed around 4 ounces at birth, but has been growing fast and now is approaching 5 pounds. Adult river otters usually weigh 11 to 30 pounds. 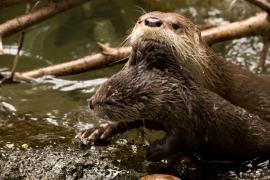 Since both Tilly and the pup's father, B.C., were born in the wild, they are considered genetically important for the breeding otter population in North American zoos. Both parents are rescue animals who had a rough start to life.

Tilly was found orphaned near Johnson Creek in 2009. She was about 4 months old, had been wounded by an animal attack and was seriously malnourished. Once her health had stabilized, Tilly came to the Oregon Zoo in a transfer facilitated by the Oregon Department of Fish and Wildlife, which oversees the species' protection.

The pup's father, B.C., was found orphaned near Star City, Ark., also in 2009. He was initially taken in by the Little Rock Zoo, but transferred here the following year as a companion for Tilly. The two otters hit it off quickly and have been playful visitor favorites ever since. (B.C. arrived at the Oregon Zoo with the name Buttercup; when he was little, keepers thought he was female.)

Now that the threat from fur trappers has declined, North American river otters are once again relatively abundant in healthy river systems of the Pacific Northwest and the lakes and tributaries that feed them. Good populations exist in suitable habitat in northeast and southeast Oregon, but they are scarce in heavily settled areas, especially if waterways are compromised. Because of habitat destruction and water pollution, river otters are considered rare outside the Pacific Northwest.