In all of nature, nothing perhaps is so magical as the moment a butterfly first unfurls its wings.

Now, for what is believed to be the first time ever, Oregon Zoo videographer Michael Durham has captured that transformative moment in the life of a rare Taylor's checkerspot, one of the Northwest's most beautiful — and most endangered — butterflies.

Each year, the zoo's butterfly conservation lab raises thousands of checkerspot larvae for release into the wild, part of a collaborative effort to reestablish this imperiled species at sites where it once was abundant.

More than 3,200 checkerspot caterpillars reared at the zoo were released in Washington this March, but 175 of them stayed behind in the conservation lab to complete their development into adult butterflies — a "rear guard" of sorts that breed and lay eggs to produce caterpillars for release next year.

Over a span of warm, sunny days earlier this month, the zoo checkerspots began to emerge from their pupae, a process known as eclosion.

"That first moment outside the chrysalis is so amazing," said butterfly keeper Mary Jo Andersen. "Once they eclose, they're just beginning their brief, beautiful time as adult butterflies, which only lasts a couple of weeks. The video catches that moment perfectly — when the wings expand it's like a flower opening up from its bud."

Durham's time-lapse, which captured an image every five seconds, shows a Taylor's checkerspot's wings slowly expanding as the butterfly pumps hemolymph into them. Hemolymph, or "insect blood," is a combination of nutrients and fluids. By selectively pressurizing different body segments, the butterfly pushes fluid through tiny veins in its wings, causing them to unfurl. 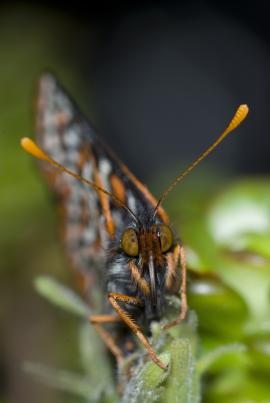 Over the past couple of weeks, Andersen said, adult butterflies at the zoo have been breeding and have laid thousands of eggs to start the circle of life all over again: The caterpillars that hatch from these eggs will be reared at the zoo to be released by the Washington Department of Fish and Wildlife late next winter.

After eight years of working to increase the number of endangered checkerspots in the field, Andersen says the effects are visible.

"WDFW biologists have recently documented these butteflies in places where they've been gone for ten years or more," Andersen said. "As a zookeeper and conservationist, it's great to know we're helping make a difference."

The Taylor's checkerspot butterfly is listed as endangered in Washington state and is under review for federal listing. (Oregon does not include invertebrates on its endangered list.) While the butterflies themselves are small, they are important pollinators and have a big impact on their ecosystem.

The Oregon Zoo is a charter member of the Association of Zoos and Aquariums' Butterfly Conservation Initiative, a collaborative effort among nearly 50 zoos and aquariums. The zoo works in partnership with and receives funding from the Washington Department of Fish and Wildlife and Joint Base Lewis-McChord through its Army Compatible Use Buffer program to rear checkerspots and release them to designated field sites. Additional project partners include the U.S. Fish and Wildlife Service, the Xerces Society and the Sustainable Prisons Project administered through The Evergreen State College and Mission Creek Corrections Center for Women.

Related links:
Learn more about the Oregon Zoo's effort to save Taylor's checkerspots and other imperiled Northwest species