It's summertime, and some of the Oregon Zoo's tiniest residents are heading to the coast. Zoo conservationists are busy preparing the last of this season's Oregon silverspot butterflies for one-way passage to either Bray Point or Rock Creek in an effort to stabilize declining populations of this threatened species.

More than 830 zoo-reared silverspots have already been released this summer, transported as pupae (cocoons) to grassy headlands and salt-spray meadows along the coast, where they can complete their transformation and join their wild counterparts. The last 18 will make the trip today, for a total of 850 released this summer. 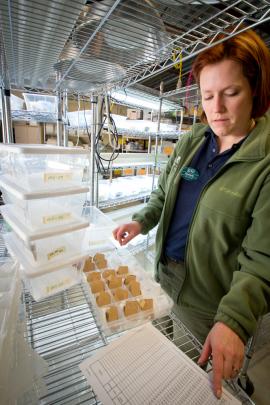 In addition to releasing pupae, the Oregon Zoo raises and plants thousands of early blue violets, on which the Oregon silverspot depends, into butterfly habitat.

"When the caterpillars hatch, they're tiny — just about the size of Abe Lincoln's nose on a penny," Andersen said. "But they will eat more than 300 nickel-sized violet leaves before they're ready to pupate."

Last summer, before the final batch of 2012 pupae were sent to their new beachfront homes, Oregon Zoo photographer Michael Durham captured what is believed to be the first time-lapse video of a silverspot caterpillar transforming into a chrysalis.

"What he captured was nothing short of magical," Andersen said. "When a caterpillar pupates, all of its molecules literally liquefy, and it reformulates as a butterfly. Sometimes you need to have a meltdown in order to change your life."

The zoo works in partnership with Woodland Park Zoo, the Washington Department of Fish and Wildlife, Mission Creek Corrections Center for Women and the Xerces Society to develop husbandry protocols, rear butterflies and release them into the wild.

Related links:
Learn more about the Oregon Zoo's effort to save Oregon silverspots and other imperiled Northwest species