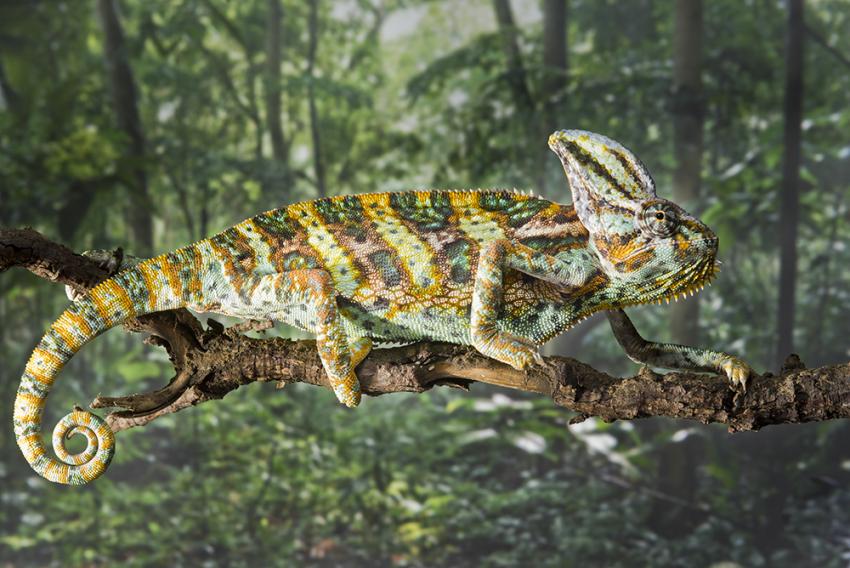 Bazinga, a veiled chameleon, is a hit with visitors to zoo's Predators exhibit

The foliage isn't the only thing changing colors in Washington Park this month. A new chameleon at the Oregon Zoo has been showing visitors why this tree-dwelling reptile is a true master of disguise.

Bazinga, a foot-long veiled chameleon who recently moved into the zoo's Predators of the Serengeti area, can be seen indoors across from the dwarf mongoose habitat — but you might not notice him at first glance.

"Spend some time looking for him before deciding he's not in there," said curator Amy Cutting. "Chameleons are masters of camouflage. Often, he will scrunch down and turn on an angle to look even more like a leafy branch."

"Folks will start seeing new species cropping up all over the zoo over the next six months or so."

Although well known for their ability to blend in with their surroundings, chameleons change colors for more than just camouflage. A shift in this colorful creature's complexion can also indicate a heightened emotional state; often the change takes place when a chameleon is feeling threatened or defending territory against predators.

Once you've spotted him, the veiled chameleon is striking-looking, with kaleidoscopic coloration, swiveling eyes and a cone-shaped head that's topped with a finlike casque.

"Chameleons are stunning, but they are known for being shy and sensitive animals," Cutting said. "We chose a species that's known for being hardier, and Bazinga has actually been seen showing quite a bit of interest in our visitors."

Native to Yemen and Saudi Arabia, veiled chameleons inhabit any arboreal habitat, including woodlands, tree-lined roadways and gardens. Though not considered endangered, the species faces threats due to habitat loss and capture for the pet trade. The pet trade has led to problems outside the species' native range: Released or escaped veiled chameleons have established colonies in both Hawaii, where this adaptable lizard is considered an invasive species, and in southern Florida, where conservationists are concerned it may compete with native wildlife.

Also new to the zoo's Predators of the Serengeti area: an African house snake, which can be seen in the Discovery Room, and a spiny-tailed Uromastyx lizard, located in the kopje rocks exhibit.

"We are trying to build up our reptile and amphibian collection again, as we know visitors really enjoy them," Cutting said. "Folks will start seeing new species cropping up all over the zoo over the next six months or so."