Lion update: Smallest cub is back with her family

The smallest of three African lion cubs born at the Oregon Zoo last month has been reunited with her family following an intensive-care intervention and a nine-day stay in the zoo's Veterinary Medical Center. 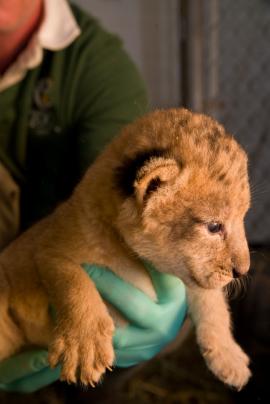 "The little one's definitely not out of the woods yet," said zoo veterinarian Tim Storms. "But medically speaking the outlook is much better than it was a week ago. Her blood-glucose levels are normal and she's able to maintain a good body temperature. She's vigorous and responsive. She's still underweight, but she's up to about 4.2 pounds now, which is a significant improvement."

Keepers weren't sure how the cub's mom, Neka, would react when they returned the little one to the lioness's private maternity den yesterday afternoon, but the first-time mom accepted her cub straightaway.

"Neka seemed to pick up right where she'd left off," said curator Jennifer Davis, who oversees the zoo's Africa and primate areas. "She just started grooming the smaller cub right along with her other two, almost as if she'd never been away."

In addition to the cub's ongoing medical issues, concerns remain over how the smallest cub will manage now that she's back in mom's care. Keepers — who took shifts monitoring the new family via surveillance camera overnight — reported the smallest cub still was not nursing as much as she should be.

"It's something we're watching very closely," Davis said. "Overnight, she only had two bouts of nursing, and they lasted about a minute each. Today, there was a longer session — about seven minutes — which is encouraging, but still not enough. She doesn't seem to track things as well as the others, and she isn't as insistent about nursing, whether it be from a bottle or nipple. The good news is that Neka continues to be a great mom, and the two bigger cubs are doing really well. We're just hoping the little one can get her strength up to normal as quickly as possible and catch up."

Keepers say Neka, who gave birth on Sept. 7, has been a nurturing and attentive mom — grooming, nursing and wrangling her cubs from the moment they were born. Despite her exceptional mothering skills, the smallest of the three has not thrived like the other two.

On Sept. 19, veterinarians conducted their first neonatal exam a day sooner than planned, when keepers — who had been monitoring the new family via surveillance camera — reported the smallest cub seemed lethargic and wasn't nursing regularly. The exam showed her to be dehydrated with low body temperature and blood-sugar levels, and an elevated white blood-cell count.

Animal-care staff intervened, entering the maternity den to administer supplemental fluids and nutrition at times when Neka was separated for feeding. By Sept. 22 — when the cub had not improved significantly, and staff had noticed changes in Neka's parenting behaviors — the 2-week-old was moved to an incubator in the zoo's Veterinary Medical Center, where she received bottle-feedings along with IV fluids and antibiotics.

"We've been doing everything possible to give this cub a fighting chance," Davis said, "and now we're just hoping she pulls through."