Some of the world's largest land animals demolished some of the area's largest pumpkins during the Oregon Zoo's annual Squishing of the Squash today.

Lily - the nearly one-year-old 1,000-pound calf - experienced her first squash squish with a massive pumpkin that outweighed her by 300 pounds. Nicknamed 'gourdzilla', the giant pumpkin for this year's Squishing of the Squash was provided by Larry and Christy Nelson of Albany, Ore. 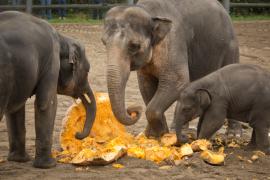 The zoo's most famous resident, Packy, got his own personal-size pumpkin — a smaller 300-pounder provided by Pacific Giant Vegetable Growers.

The event was a precursor to the zoo's annual Howloween celebration, which runs Oct. 26-27 and is free with zoo admission. Throughout the weekend, visitors can watch the zoo's enrichment team provide animals with holiday-themed treats like jack-o'-lanterns stuffed with snacks. Meanwhile, a scavenger hunt directs trick-or-treaters to activity stations with info about animals, their habitats and adaptations. Goody bags are given out for completed hunts at the zoo's exit.

Pumpkins for the weekend's Howloween enrichment activities are provided by Al's Garden Center, with a few more big ones donated by the Nelsons and Pacific Giant Vegetable Growers. Enrichment items such as pumpkins help keep the zoo's animals mentally and physically stimulated.