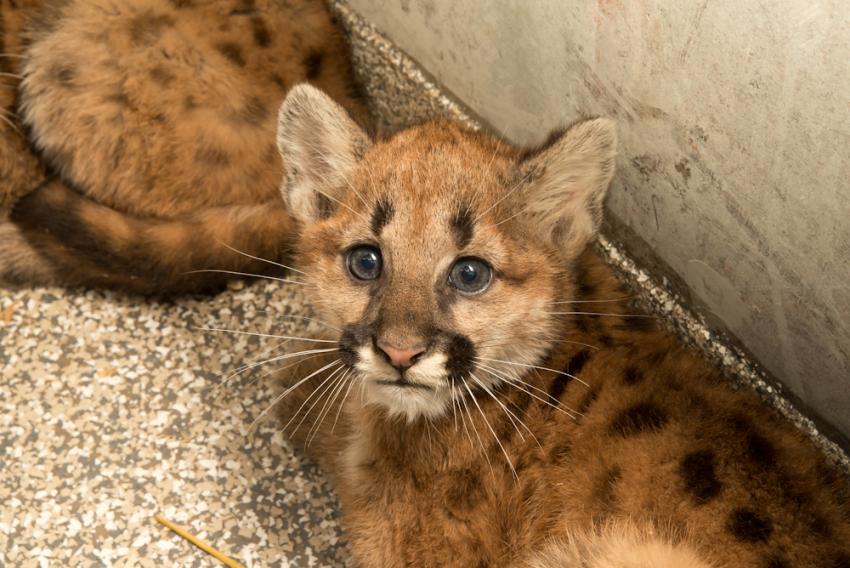 After a brief Portland stop, cubs will get new homes in New York and Kansas

While Neka's cubs have been getting most of the attention at the Oregon Zoo lately, another trio of lion cubs has quietly moved in behind the scenes at the zoo's veterinary medical center.

Three young cougars found orphaned in southwest Oregon last week have been staying at the zoo temporarily while they await flights out of town this week en route to new, permanent homes in New York and Kansas.

"Both zoos have a history of excellent care for cougars, and they have spaces all ready for these cubs."

"They are tiny and feisty," Schireman said. "They're only 8 pounds right now — about the size of small housecats — but with feet the size of hockey pucks. They still have blue eyes and fuzzy spotted coats, which they will eventually grow out of."

Two of the cubs arrived Oct. 29, and the Oregon Department of Fish and Wildlife found and delivered the third a couple of days later.

"They're nervous of course," Schireman said. "But they're starting to calm down. When we brought the third cub in, the first two were huddled in back of their crate, growling. Within 20 minutes, the third cub slinked out of her crate and joined her sisters, and then they all settled down together."

Once they learned of the orphaned cubs, ODFW officials quickly contacted Schireman, who serves as the Association of Zoos and Aquariums' species coordinator for cougars.

"I'm usually the first person wildlife departments call when orphaned cubs are found," Schireman said. "Without a mother, young cougars lack the skills and resources they need to survive on their own in the wild."

Two of the cubs will be moving to the Lee Richardson Zoo in Garden City, Kan., which recently opened a $1 million Cat Canyon habitat housing bobcats, jaguars and cougars — including a 12-year-old male named Payton, who will be housed in an adjacent area, separate from the young pair.

The third cub will go to the New York State Zoo at Thompson Park, joining Ninja, a 2-year-old male placed there by Schireman in 2011. Ninja's name was suggested by a New York kindergarten class "because he jumps like a ninja."

"He's been waiting for a buddy to get pouncy with," Schireman said. "Both zoos have a history of excellent care for cougars, and they have spaces all ready for these cubs."

As AZA species coordinator, Schireman has found homes for close to 85 cougar cubs in zoos around the country. Most of the cougars currently living in U.S. zoos are orphans placed by Schireman.

In 2011, the National Association of Zoo Keepers recognized Schireman with a Certificate of Merit in Conservation for "outstanding work developing an orphaned animal placement program that gives assistance to state wildlife agencies and zoological institutions in placing orphaned pumas."

Cougars — also known as mountain lions, pumas and (in Florida) panthers — live mostly in the western United States and Canada. They weigh from 75 to 150 pounds and have a carnivorous diet both in the wild and at the zoo. Females are either pregnant or raising cubs for the majority of their lives. After three months of gestation, two to three cubs are usually born in a litter and live with their mother for up to two years.

Metro, the regional government that manages the Oregon Zoo, has preserved and restored key habitat for our region's native wildlife, including cougars and other predators, through its voter-supported natural areas program. While cougars are unlikely to be seen in most Metro natural areas, their tracks have occasionally been seen in places such as Oxbow Regional Park and the Clear Creek Natural Area.