River otter Molalla is all grown up, moving to Seattle 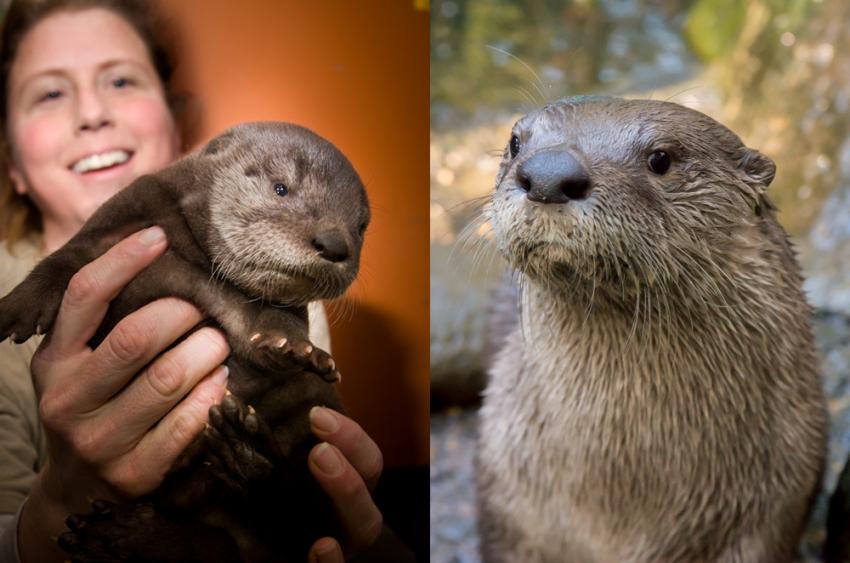 Mo, whose swim lessons made a big splash this year, is headed to the Seattle Aquarium

They grow up so fast.... On Jan. 28, 2013, Molalla, the first river otter to be born at the Oregon Zoo, arrived. Weighing just 4 ounces, unable to see or walk, let alone swim, he was completely dependent on his mom, Tilly, for the first couple months of his life. Almost one year later, Mo — as he is known for short — is a sleek, active young adult, and will soon be moving to a new home at the Seattle Aquarium.

"In the wild, otter pups usually stay with their mom for about a year before striking out on their own, so the timing of this move is right."

"It's been so much fun watching Mo grow up over the past year," said Julie Christie, senior keeper for the zoo's North America section. "In the wild, otter pups usually stay with their mom for about a year before striking out on their own, so the timing of this move is right. Mo's big now, almost the size of B.C., his dad. Sometimes it's hard for visitors to tell the two apart, especially when they're darting around underwater, doing somersaults and backflips."

Other than size, Christie said, the best way to tell the father and son apart is by the cream-colored patch of fur on B.C.'s throat, which is much paler than Mo's.

Mo made a big splash with zoo visitors and otter fans worldwide when he began taking swim lessons last spring. The instructor — his mother, Tilly — didn't go easy on him, nudging her pup to the water's edge and then plunging in with a firm grip on the scruff of his neck, just as otter moms do in the wild. A video of young Mo's water trials logged more than 600,000 views on the zoo's YouTube channel, offering a rare glimpse of this major milestone on a pup's journey to otterhood.

While it is hard for Oregon Zoo staff to see Mo go, they are happy he is staying in the Northwest. Christie said animal-care staff at the Seattle Aquarium will be sending updates on the otter's progress there, and that keepers here are already making plans to visit Mo in Seattle.

Metro's voter-approved Natural Areas Program has protected more than 90 miles of rivers and streams in the Portland region. Find out how Metro is working to conserve and restore habitat for river otters and other wildlife.