Orphaned cougar cubs moving on after 6-week stay at zoo

Last week, while the Oregon Zoo's three African lion cubs took a snowy star turn on Good Morning America, another lion cub trio was purring away in private, camped out behind the scenes at the zoo's veterinary medical center.

Three young mountain lions — orphaned in eastern Oregon last month when their mother was shot by a hunter — have been growing up out of the limelight, under the watchful care of zoo veterinary staff and keepers.

"It's wonderful to feel like you're doing something to help babies that in the wild wouldn't survive."

When the cubs arrived at the zoo Jan. 10 — dehydrated, hungry and scared — they weighed just a couple pounds each, had yet to cut their teeth, and their eyes were still cloudy blue and unable to focus. Zoo vet staff and keepers took shifts to make sure the little ones received around-the-clock care with feedings every four hours.

Now, after five weeks of slurping down formula, pouncing on each other's tails, and snuggling up to a cheetah plush toy, the three are finally big enough to travel to their new, permanent home in North Carolina. Travel arrangements are still being finalized, but it looks like the cubs will be departing the first week in March.

The cubs — one male and two females — were brought to the zoo by the Oregon Department of Fish and Wildlife. After rescuing the orphans, ODFW officials quickly contacted Oregon Zoo keeper Michelle Schireman, who serves as the Association of Zoos and Aquariums' species coordinator for cougars.

"I'm usually the first person wildlife departments call when orphaned cubs are found," Schireman said. "Without a mother, young cougars can't develop the skills and resources they need to survive on their own in the wild. Unfortunately, at the age these cubs were orphaned, they would have either starved to death or been eaten by another predator, most likely within the day."

All three cubs will be moving to the North Carolina Zoo in Asheboro, N.C., bringing some youthful energy to that zoo's Cypress Swamp habitat, which until recently had housed two geriatric cougars; both died earlier this year. 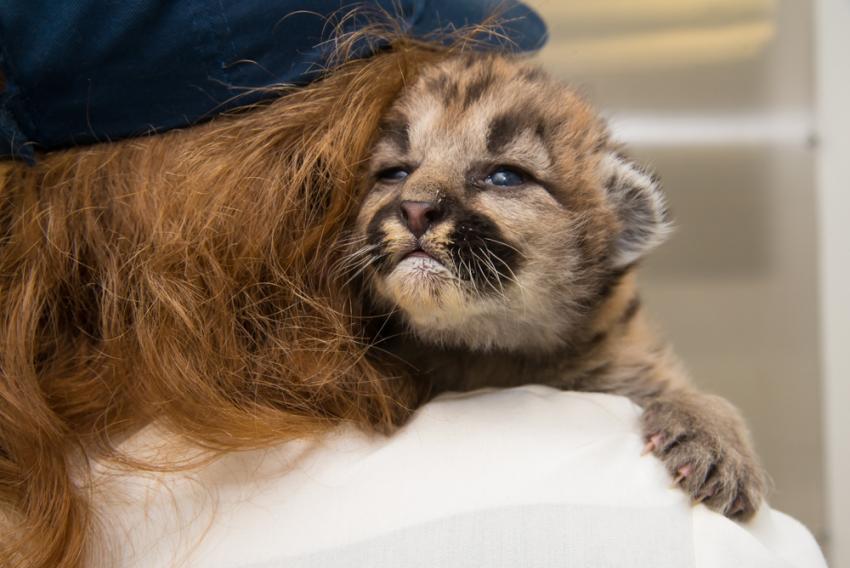 "It's wonderful to feel like you're doing something to help babies that in the wild wouldn't survive," Schireman said. "I've actually been to the North Carolina Zoo. It's a very nice cougar exhibit, and one of the biggest benefits is that they all get to go together. They'll be little ambassadors."

As AZA species coordinator, Schireman has found homes for more than 100 cougar cubs in zoos around the country. Most of the cougars currently living in U.S. zoos are orphans placed by Schireman.

In 2011, the National Association of Zoo Keepers recognized Schireman with a Certificate of Merit in Conservation for "outstanding work developing an orphaned animal placement program that gives assistance to state wildlife agencies and zoological institutions in placing orphaned pumas."

Cougars — also known as mountain lions, pumas and (in Florida) panthers — range throughout southwest Canada, the western United States and South America. They weigh from 75 to 150 pounds and have a carnivorous diet both in the wild and at the zoo. Females are either pregnant or raising cubs for the majority of their lives. After three months of gestation, two to three cubs are usually born in a litter and live with their mother for up to two years.

Metro, the regional government that manages the Oregon Zoo, has preserved and restored key habitat for our region's native wildlife, including cougars and other predators, through its voter-supported natural areas program. This program helps provide the healthy ecosystem needed for wildlife to thrive. While cougars are unlikely to be seen in most Metro natural areas, their tracks have occasionally been seen in places such as Oxbow Regional Park and the Clear Creek Natural Area.

Find out how rescued cougars at the Oregon Zoo are getting predatory with the help of a new enrichment device created by Michelle Schireman.