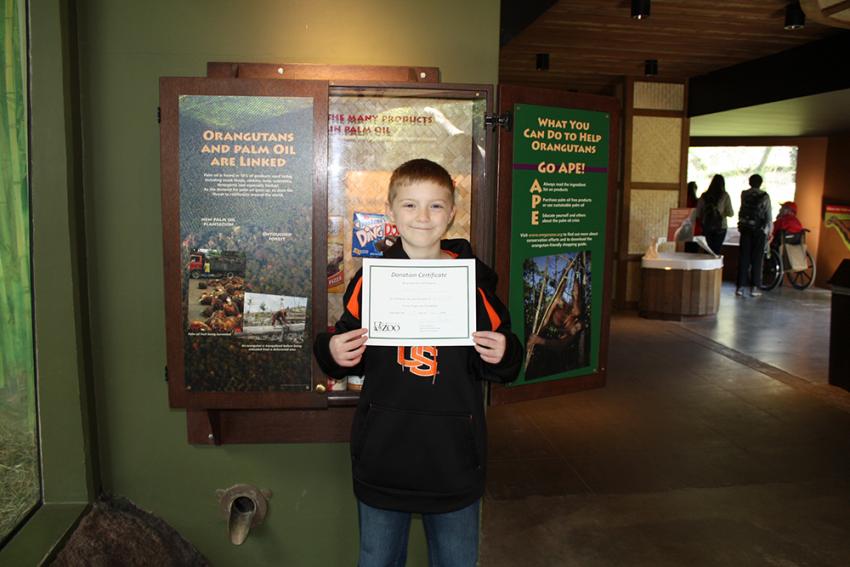 Landon Clark's first orangutan encounter was with Inji. He was 2. She was 45. A photo from that visit shows them sizing each other up across the glass, marking the moment Inji secured the distinction of Landon's "favorite animal." Six years later, when he visited her again, he discovered that Inji's species was being driven toward extinction by the production of palm oil.

"We looked at our labels at home... It was ridiculous how many products there were with palm oil."

"We looked at our labels at home, and I was very surprised," Landon said. "It was ridiculous how many products there were with palm oil."

For his birthday that year, Landon asked for donations to his own "help the orangutans" fund — a glass jar — instead of gifts. He added to his change jar for another two years, and last month, he presented the Oregon Zoo Foundation with a gift of $164.07 to help support conservation efforts worldwide.

"We had been going to the zoo for years, but it wasn't until we really stopped to read the graphics that we realized there were simple things we could do to protect animals," said Landon's mother, Jami Clark. "Landon got our entire family in the habit of paying attention to labels, and we all became very involved in the consumer choices we made."

In January, the Oregon Zoo was appointed to a Palm Oil Task Force charged with raising awareness about the issue throughout the community. The zoo is currently undergoing an inventory project aimed at better understanding how palm oil is used on campus.

"Palm oil is the world's most popular vegetable oil, and it's here to stay," said education curator Grant Spickelmier. "But as consumers we can encourage companies to produce palm oil in a way that doesn't lead to more deforestation. Providing that first spark of inspiration for kids like Landon is why the Oregon Zoo exists. We want every zoo visit to arm families with actions they can take to create a better future for wildlife."

At home, Landon and his family have been writing to companies that use palm oil in their products, thanking them for making sustainable palm oil commitments and asking them to do more. They've also replaced some of their products. And Landon's sisters have started their own change jars.

According to Landon, taking action for orangutans was easier than he thought.

"You can save money, write letters and just do your best to spread the word," he said. "You don't have to do it by yourself. It's a lot easier when you bring your family into it."

Related links:
Find out which companies are taking steps toward sustainable palm oil